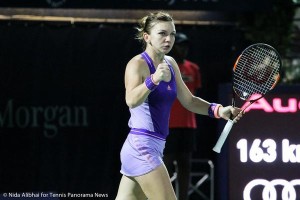 Any doubts over Halep’s fitness was dispelled pretty much in an instant (well, at least in the first 25 minutes) as the Romanian scampered around as well as she has ever done, to wrap up the first set over the last Slam title winner of the year in just 25 minutes without dropping a game.

Halep, who has struggled in the past with the variety and finesse that an on-form Pennetta has to offer, could seemingly do nothing wrong in the first set, as Pennetta struggled to find any way into the match.

The second set saw a lot more attacking play from the Italian as Halep maybe faltered ever so slightly, not quite finding the lines but having no trouble with the wide open space behind them.

But Pennetta admitted that she just was not on point to take her chances today as Halep set down a marker that her run to the finals last year was no fluke.

She admitted: “The second set was much better. I was trying to find something more, to be more aggressive, and I was more close and I have my chance. I didn’t make it.”

Of course the beauty of the round robin format is you live to fight another day. While Pennetta has been to the season ending finals before, winning with doubles partner Gisela Dulko in 2010, this was her first (and of course last) shot at the singles.

“I think I have to recover a little bit, to have more energy, to be more aggressive, and that’s going to be my goal for the next match for sure.”

For the Romanian – if she can keep up that level of aggression, she will be targeting her first win over Maria Sharapova.

She said: “I was well‑prepared and I knew how to play against her. I was expecting that she’s going to play the same like in US Open, and I knew how to adapt the game. So I was solid. I was smart‑aggressive, I can say. I didn’t use overpower. I just opened the court and I tried to finish the point.”

Halep started quickly last year, stunning Serena Williams in the round-robin stages before succumbing in the final on her debut. She admitted that last year she was just happy to be there, but if she plays throughout the early stages like she did today, she has to be a favourite to win at the end of next Sunday. 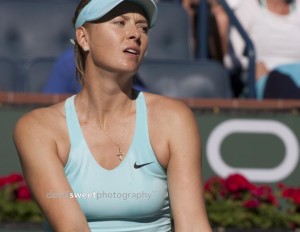 If Halep was speedy, we knew we were in for the long haul as Maria Sharapova and Agnieszka Radwanska embarked upon games that were almost half as long as the first set of Halep/Pennetta.

Sharapova looked to be a little rusty – something that she probably expected having not gotten through a full match since her semifinal defeat by Serena Williams this summer at Wimbledon. Fist-pumping battling, it was left to Radwanska to pull out the ninja tricks with some outstanding shot-making to keep herself in contention as they both had their chances to make a break, neither being able to convert.

After a quick start in the second set by Sharapova, they seemed to be back to their old dueling ways as Radwanska righted the ship to get back on the board at 1-3. But by now the bit was between the Russian’s teeth as she leveled the match to set up a decider, and more importantly to answer the question about how match-ready she was.

The first advantage in the decider went to Sharapova in a hold just shy of 14 minutes followed by a break to put Radwanska firmly on the back foot. By now looking spent, it was as much as she could do to stay in contention as Sharapova faltered once after breaking to serve out the match for the first time, before finally grinding out the win, 4-6, 6-3, 6-4.

Radwanska had to admit this was the one that got away, after the match: “I think she is just kind of player that even that she didn’t play for couple months, she’s always ready to play matches and always in shape to play really good match.

“I think we always playing three hours match in Championships, so I’m not surprised.

“I think it was really good match. I didn’t really use my chances. Couple of off games that I just slip away a little bit.”

“Even when you lose you have chances to go for it. Of course no easy matches here, so I’ll be very happy to play the same tennis that I was playing today and we’ll see.”

For Sharapova, the relief of having completed her first match since July was palpable.

She explained: “I’ve had a lot of starts and stops, and I was just really thrilled that despite not playing these last few months and not playing my best tennis, I was facing an opponent that obviously deserved a spot in tournament and has had a really great last few months, and I just felt like I was able to take myself to another level physically, which I didn’t exactly expect that I would be able to.

“I know we have pretty long ones. I know a lot of you look forward to them. I do, too. I really do enjoy playing against her. I feel like those are some of the matches that I like to watch on TV, when different styles of games clash against each other. Becomes that bit of a cat and mouse game.”

Play will continue on Monday with both Garbiñe Muguruza taking on Lucie Safarova in the evening session, followed by Petra Kvitova and Angelique Kerber.

Ros Satar is covering this event for Tennis Panorama News. She is a British sports journalist covering tennis, and can also be found at Britwatch Sports.