You are here: Home / Contributors / Muguruza and Kerber Win Their Opening Matches at WTA Finals in Singapore 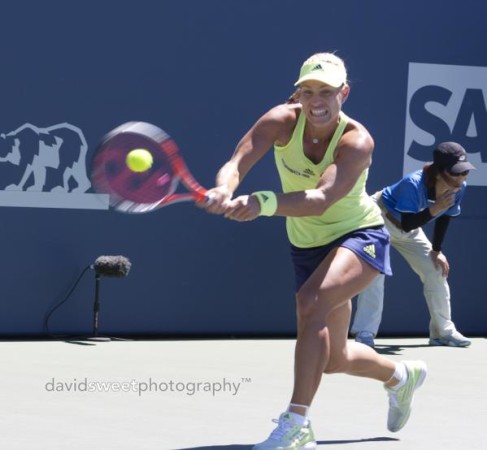 (October 26, 2015) SINGAPORE –  It was the turn of the White Group to get underway in Singapore, after a high quality end to the opening day, as the two busiest stars opened the evening’s proceedings.

Garbine Muguruza may have looked sluggish and like an easy target in their doubles on Sunday where she and partner Carla Suárez Navarro lost to Lucie Safarova and Bethanie Mattek-Sands, but her steely focus was back in full effect as she sought to push for a break before the first change of ends, finally coming good on her fourth break point.

She went hunting for a double break cushion in a lengthy see-sawing game but had to wait until the end of the set to get her reward, breaking the Czech for a second time to seal the first set 6-3.

Safarova kicked into gear at the start of the second set, breaking Muguruza to start, as she built up a 3-1 lead. The Spaniard edged back on equal terms as the pair upped the quality of their play, pushing each other towards a tie-break.

It was a more aggressive start by Muguruza, as she built up a head of steam, leaving Safarova on the back foot. Even a couple of mini-breaks was not quite enough to put her back in contention, as Muguruza closed out with two breaks of the Safarova serve to claim her first singles win at the WTA Finals, 6-3, 7-6(4).

Despite the loss, Safarova was able to take some positives away, and of course lives to come back another day.

She said: “It was a good match today. She was serving very well and pressuring me. Was going for her shots. I think the difference maybe a lot in self‑confidence. Even in those key moments she remained very strong.”

She continued: “So I feel like I’m slowly back in my game, but of course you need the wins. So I will keep positive and keep fighting in the next matches.”

For Muguruza it was a dream start on what has been an outstanding year.

She told media, after the match: “Obviously to go there and play and win for the first time, it’s great. So I feel now more calm, more in the tournament.

“I just went here and maybe … she hasn’t played for maybe couple of weeks. But I definitely played good today, so I think that helped a lot. (Smiling.)”

The remaining lefties came right along to do battle next. In practice, Petra Kvitova had looked happy and relaxed, but it was Angelique Kerber who made the quickest adjustment to the court, swiftly breaking to establish a lead that Kvitova never looked close to eradicating.

Things looked more hopeful for the 2011 champion as she ground away at Kerber to break away for a 3-1 lead, before the pair traded breaks back and forth on their way to a tie-break. Once ahead, Kerber hung on to grab the victory 6-2, 7-6(3).

For a match that promised so much, Kvitova could only acknowledge Kerber’s late burst of form at the tail end of the year.

She said: “I know that she’s a great player. She’s very good mover and fighter as well, so I know it’s going to be difficult. I think in the second set it was kind of the fight finally.

“I was trying what I can in the moment. I expect for sure difficult match. She play really good swing in Asia. I just knew it’s going to be good match. I didn’t really play the best in the first set, but I was trying to do something a little bit better in the second.”

It was a satisfied Kerber who took to the platform – but surprisingly may have also been gearing up for the long haul. She admitted: “I was a little bit nervous before I went on court, but I was actually trying to just play my game plan and it works.

“The second set was like a little bit close and was up and downs. Yeah, but I played the tiebreak at the end very good, so that was the key for the match at the end.”

Agnieszka Radwanska gets the singles program underway on Tuesday against Flavia Pennetta, with the evening match set for another epic encounter between top seed Simona Halep and Maria Sharapova.