You are here: Home / Events / Serena Williams vs. Wozniacki and Monfils vs. Wawrinka Headline BNP Paribas Showdown at Madison Square Garden in March 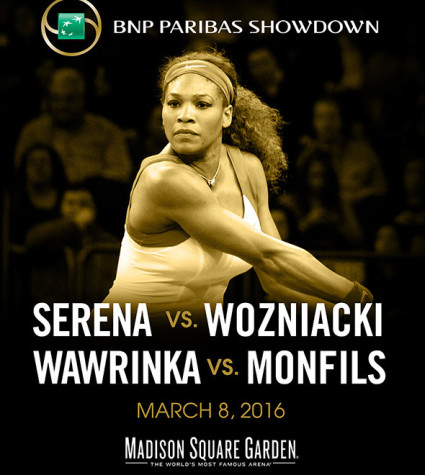 New York, NY (October 28, 2015) – It was announced  that 21-time Grand Slam Champion and  Serena Williams, will take on close friend and former No. 1, Caroline Wozniacki, while current No. 4 men’s player Stan Wawrinka will square off with French star Gael Monfils in the 9th annual BNP Paribas Showdown at Madison Square Garden.  The one-night tennis event, which is being held on World Tennis Day for the fourth straight year has become a staple on the tennis calendar and is set for Tuesday, March 8.

The BNP Paribas Showdown is produced by MSG Sports and StarGames. Tickets starting at $35.00 will go on sale November 1 at 9:00 a.m. and can be purchased at the Madison Square Garden box office, online at www.thegarden.com and at all Ticketmaster outlets.

“I have been fortunate to play in World Tennis Day events in New York and Hong Kong,” said Caroline Wozniacki.  “It is a great day to celebrate our sport. This year will be even more special as I return to Madison Square Garden with Serena. It doesn’t get much better than that.”

Stan Wawrinka said, “There are certain things in your tennis career that you want to do: win Grand Slams, win the Davis Cup for your country. Playing in Madison Square Garden is one of the things on that list so I am excited about the invitation to play in the BNP Paribas Showdown and look forward to walking onto The Garden court.”

“I have always loved playing for the New York crowd which inspires me very much,” said Gael Monfils.   “So coming back to New York with Stan on World Tennis Day will be a great opportunity to play for the fans. We will put on a great show for them.”

StarGames President, Jerry Solomon added, “I am excited that once again the BNP Paribas Showdown will offer fans great tennis and entertaining matchups. Moreover, I think Serena has really become the ‘people’s champion’ and we have priced tickets to encourage her fans to be in attendance at Madison Square Garden as we honor her on World Tennis Day. It promises to be another night full of memorable moments that you won’t want to miss.”

“Year in and year out, the BNP Paribas Showdown at Madison Square Garden continues to attract the top tennis stars in the world and this year is no different,” said Joel Fisher, executive vice president, MSG Sports.  “We are thrilled to host these top athletes in what has become one of the most exciting and fun nights on the tennis calendar.”

As in years past, the BNP Paribas Showdown at Madison Square Garden will once again headline a full day of worldwide activities as part of World Tennis Day, a global tennis participation effort. All events promote tailoring the game to players 10-and-under with smaller racquets, lighter balls and modified scoring.

Williams, who will make her third appearance in the annual BNP Paribas Showdown, is currently ranked No. 1 in the world, a ranking she has held on six separate occasions dating back to July 8, 2002.  She has a total of 21 Grand Slam singles titles – the third-most of any tennis player, male or female of all time.  Williams holds the most major singles, doubles, and mixed doubles titles combined amongst active players and her record of 36 major titles puts her fifth on the all-time list.  Additionally, Serena has won four Olympic gold medals, one in women’s singles and three in women’s doubles.

Wozniacki is a former World No. 1 who is currently ranked No. 11 and will be making her second appearance at Madison Square Garden in the BNP Paribas Showdown.  She made her professional debut at 15 years old in 2005 and has since won 23 WTA singles titles.  In 2008, she was named WTA Newcomer of the Year award. She took on Maria Sharapova in her MSG debut in 2012.

Wawrinka and Monfils will make their Madison Square Garden debuts when they step onto the Garden court on March 8.

Wawrinka, currently ranked No. 4 in the world, has won two Grand Slam titles including the 2014 Australian Open and 2015 French Open title.  Additionally, Wawrinka was a member of the Swiss team that won the Davis Cup in 2014 and also won a Gold Medal in the 2008 Olympics.  Stan and doubles partner Marco Chiudinelli played in the longest known doubles match when they faced Tomas Berdych and Lukas Rosal in a match that lasted over 7 hours.

The Frenchman, Monfils, is currently ranked No. 21 in the world. In 2014, he finished in the Top 20 for 1st time since 2011 and 5th time overall and advanced to the quarter finals of both the US Open and French Open.  He made it to the semi finals of the French Open in 2008 and to the quarter finals of the US Open in 2010.   In recent Davis Cup play, Monfils went 3-0 in singles to help France reach its first final since 2010.