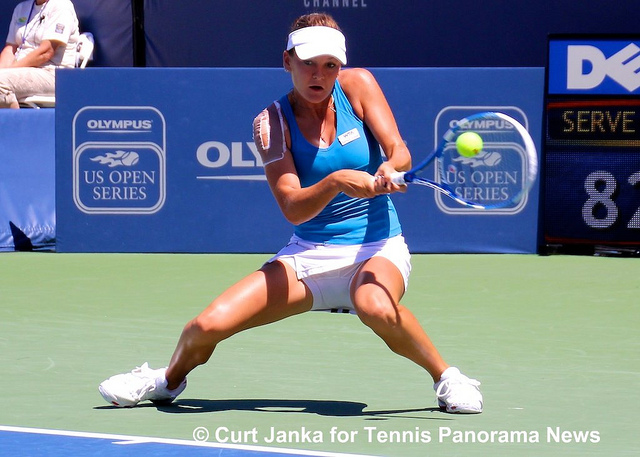 (October 29, 2015) SINGAPORE – After the general speculation that swirls around once the Round Robin scenarios start doing the rounds, comes the nail-biting action, and the Red Group kicked all that off in fine style on day five of the WTA Finals in Singapore.

Of all the players that came to Singapore at the end of last week, it was maybe Agnieszka Radwanska who looked to be in the best form. She had a solid Asian swing with just a blip in Wuhan and was looking to finish the year strong.

She was up against Simona Halep who was coming off the back of an injury but seemed to be up for the challenge, starting with a confident win, but seemingly coming unraveled yet again at the hands of Maria Sharapova.

Starting with a break, against Radwanska who had looked somewhat lacklustre against Flavia Pennetta, it looked as though the Pole was going to be starting her holidays early with a 0-3 record. But gradually those trademark Ninja skills came into play, and with some breathtakingly bold shots out of necessity to keep the ball in play, she struck back.

As Radwanska hung on to force a first set tie-breaker, sure enough Halep pushed and hustled her way to a 5-1 lead, but credit to Radwanska she kept plugging away, catching up to Halep, and pushing past her for a set point. In the rally of the tournament, she won surely the point of the tournament to take the set, winning the next six points in a row.

Momentum is everything and although Halep came through a tough hold, saving a break point along the way in the first game of the second set, that was the last show of resistance as Radwanska bulldozed past her to give herself a slim chance of making the semifinals with a 1-2 record.

After failing to maybe deliver throughout the clay court season, Halep still finishes high in the rankings with some good titles behind her, so all in all – a good performance?

For Radwanska, her hopes were alive albeit in the hands of Sharapova, as she described her comeback to win 7-6(5), 6-1.

She said: “That definitely was a crazy set. Up and downs pretty much whole set. Every point matters in that case. Well, the tiebreak I didn’t really know that I could come back, and suddenly ‑‑ I think I was really relaxed. I didn’t get tight and I think I made really good shot in important moments. When was just 5‑1 down I think I just kind of play aggressive tennis and that works.

“What I can do right now is just watch and cheer for Maria. So that’s it. (Laughter.)”

It was certainly going to be all eyes on Sharapova, but also on Pennetta, who was potentially in her last match, unless she could take at least a set off the former champion.

For a time it looked like we would see just that – Pennetta started with a break and stayed steady until around the middle of the set, when Sharapova kicked up a notch to get the break back.

Many had thought she could take a set off Sharapova, having won the last three matches over her including at Indian Wells this year. But once more when the momentum was with Sharapova, she was not going to relinquish it in a hurry as she quickly dominated the second set, winning 7-5, 6-1.

As the sun set on Pennetta’s career, it was a quick exit as she declined an on court ceremony after a hug at the net with Sharapova, who finishes top of the group with Radwanska second.

Pennetta explained her rapid departure: “I’m happy to have the chance to play this tournament. I think to have the last match against Maria was amazing play such a good champion. Was a good way also to say good‑bye, because when you lose against such a good player there is not too many things to say.

Pennetta spoke about what she’ll miss about playing the tour: “I think I will miss the players in a way it’s like a family. But I cannot tell you what I going to miss more than that.  I think also I will miss the competition.  When you go on the court, the central court, it’s something special.  I don’t think I will have it anymore. But in the other way, I am really happy to start a new part of life, new things.”

Sharapova had already qualified and knew that but did not know what the specific scenarios were as far as Pennetta was concerned.

She said: “I knew that I had qualified before my match, but I didn’t know about how the result of the match would change the standings or who would go in.       I knew if she would win she would go through. Other than that, I didn’t know the calculations exactly.

“I didn’t know in the last point that if I had won match in two that she was out, so it wasn’t something that I had thought about. But then it was mentioned to me after, right before I threw the balls up in the air that she was out.”

She continued: “Every match for me just counts at this point in the season in the last tournament. As I said before, I wanted to try to play a high‑quality three matches, and I didn’t know the results would have gone the way that I have expected.

“I’m actually, I think, also a little bit surprised that I’ve been able to win three matches, as physical as some of those matches were. I think knowing that I qualified allowed me to be a little bit more aggressive today. I thought I played quite aggressively in the second set and had a good ratio of winners and unforced errors, was quite solid. Served well.

“So all those things helped me. And also not playing a third set against Flavia, as we have done previously, is also a big help for me.”

Friday’s scenarios are a little less clean cut, but it would be a surprise not to see Garbiñe Muguruza mirror Sharapova with a clean sweep of wins, and few would begrudge Angelique Kerber her shot at getting out of the round robin stages for the first time.

With the Singapore Tennis Evening taking up the night’s festivities, play starts at 11am.

Ros Satar is in Singapore covering the WTA Finals as media for Tennis Panorama News. She is a British sports journalist covering tennis, and can also be found at Britwatch Sports.