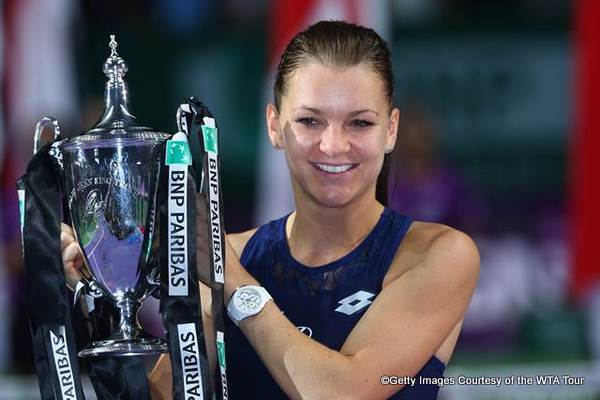 (November 1, 2015) SINGAPORE – It is fair to say this was a title that no-one was expecting at the start of the week, as Agnieszka Radwanska and Petra Kvitova took to the court. This was going to be the first time anyone with a 1-2 record in the round robin phase of the WTA Finals would go on to lift the championship trophy.

But all that needed to be put aside, especially for Kvitova, who quickly found herself down a break at the start of the opening set. Steadying the nerves to at least get on the board, it was going to be important for her to stay in contention, against an in-form Radwanska – who was ready to punish any careless generosity of points from the Czech.

The first set was completely out of her reach in 33 minutes as Radwanska’s control versus Kvitova’s errors told the story in the score line of 6-2. If ever there was a time that Kvitova needed to be on the winning side of a brutal game it was now, but Radwanska could seemingly do no wrong, breaking the Czech in the first game.

The only way out for Kvitova would be to keep the points short and somehow, she seemed to find her groove, reeling off nine points in a row to get things back on serve. Keeping the pressure on now was vital if she wanted to delay/deny Radwanska making some Polish history. At the very least (especially after a Doubles final drubbing for Carla Suarez Navarro and Garbine Muguruza in a little over an hour), the crowd needed to have a match to get their teeth into.

By the third set though it was clear that the heavy strapping on Kvitova’s right thigh was causing her grief. On more than one occasion she had looked in pain as the momentum shifted first the Czech’s way, and then back to Radwanska as she came from a break down in the decider to lead by a break.

Neither seemed willing to hold until finally Radwanska seemed to steady the ship to edge to a 5-3 lead. Kvitova’s grip loosened as Radwanska broke her to win as Kvitova dumped a forehand into the net.

Given that both players came in with a losing record, and Kvitova was reliant on Lucie Safarova delivering a straight sets win, it was a time to reflect ahead of the Fed Cup final next week.

“I think with this kind of tournament it’s more positives for sure,” Kvitova said. “I mean, I had a great match yesterday with Maria (Sharapova), and I just think that today was really big fight and just about few points and I didn’t make it.

“I think was still great even for me. The season was good. I mean, of course I wish a little bit better, but on the side I think could be much more worse. It’s still okay.”

The winner still had a look of disbelief about her, although she was reduced to speechlessness when asked if any of her prize money would be buying presents for the press!

When all said and done though, Radwanska deserved to be in the final with her tough match against Muguruza, and perhaps the results did not truly reflect the standard of her game for the large part.

She said: “I lost first two matches, but it’s not like I was playing bad. It was still good matches. I just didn’t use the chances. I wasn’t really focus enough and something just slip away and then it was hard to come back. But definitely not bad matches, especially the one against Maria. That’s why I didn’t ‑‑ I just knew being fresh and have a good rest, that is very important for us.

“I don’t know how, but I was really feeling better afterwards, and I think I used to conditions, used to surface. I think I was playing even better in those two days.”

It is worth noting that Amelie Mauresmo was the last WTA Finals champion without having won a Slam previously, and the following year she went on to win two.

She said: “Well, for sure give me more confidence, especially that in a Grand Slam you also to have win and beat couple of top players in a row.

“I think here it’s even harder because just eight of us and you don’t have any first rounds to used to the courts. But definitely a good start. I’ll definitely try to do that next year. (Smiling.)”

Kvitova of course heads to the Fed Cup Final in Prague, and Radwanska will join the IPTL this year.

Ros Satar was in Singapore covering the WTA Finals as media for Tennis Panorama News. She is a British sports journalist covering tennis, and can also be found at Britwatch Sports.