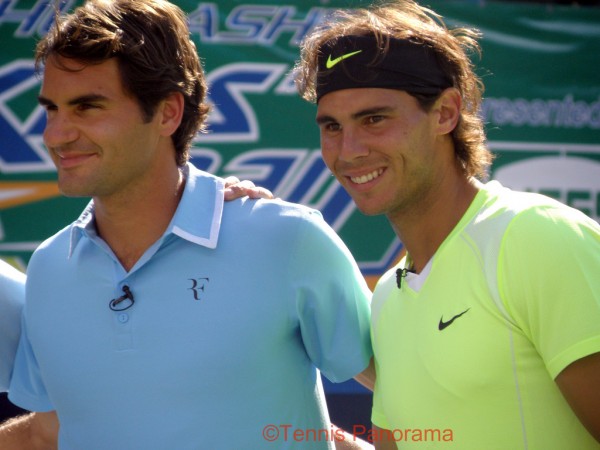 (November 1, 2015) In their first match-up since the 2014 Australian Open semifinals, Roger Federer defeated Rafael Nadal to win the Swiss Indoors final 6-3, 5-7, 6-3 in Basel. For the Swiss competing in his 10th straight Basel final, the win which gave him his seventh trophy in his hometown, broke a five-match losing streak against the 14-time major champion Nadal. This was Federer’s 12th Basel final. Nadal leads their overall head-to-head record 23-11.

“It was a very special day,” said Federer, who was once a ballboy at the tournament. “Probably it was my best victory here in Basel.”

“I lost but I was close to winning, very close,” said Nadal.

Federer hit 12 aces, 44 winners with 32 unforced errors going 3 for 7 on break points during the two-hour and two minute match.

“It was one of my best weeks in Basel, considering everything I’ve done throughout my career here,” Federer said after the match. “I thought the match was close. I had my chances in the second, but he fought back well, like he’s done throughout the week really. Overall I was really happy how I played.
“I know I’ve had better backhand days and he’s had better forehand days than today, but the match was high quality and it was entertaining and exciting for both of us as well. The confidence is good, no doubt about that. It’s good to get back into the mood of winning after Shanghai… I think the body’s gotten used to match play again after all these weeks of not playing.”

This 88th overall tennis title for Federer, now marks the fifth tournament which he has won at least seven times – Halle (8), Wimbledon (7), Dubai (7) and Cincinnati (7).

This is the sixth championship trophy he’s collected this year, adding to this titles in Brisbane, Dubai, Istanbul, Halle and Cincinnati.

Despite the loss in the final, Nadal had good week, taking down former Top 10 players Grigor Dimitrov, Marin Cilic and Richard Gasquet all in a row to reach the final. He will see his ranking move up from No. 7.

“It’s good news for me,” said the Spaniard. “Today I have been very competitive against one of the best players in the world. And on the toughest surface for me.”

“My goal is to get back to my level and be competitive against the top players again and today I was very competitive against one of the best players in the world,” Nadal said. “The match wasn’t far away from me. He played well and I played well too. The match was very close to win, but I think he served very well in the third. I want to congratulate him for the victory and I had a lot of quality things in my game and mental side to take away from the week.”

Next stop for both men will be the Paris Masters Series event, followed by the ATP World Tour Finals in London.