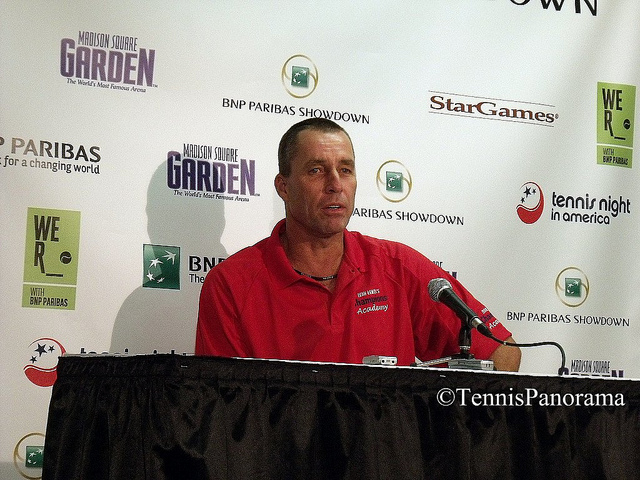 From the USTA: (November 10, 2015) – The USTA today announced that eight-time Grand Slam singles champion Ivan Lendl, former world No. 7 Mardy Fish, and former American Olympian Jill Craybas will begin coaching with USTA Player Development as part of its strategy to involve former champions and top American players in the development of current American pros and juniors.

Lendl, Fish and Craybas will work with USTA Player Development on a part-time basis beginning this fall and winter. Lendl began working with a group of top 15- and 16-year old boys at a training camp held last week at Windsor in Vero Beach, Fla., and will continue working with the group through several USTA Pro Circuit and junior tournaments in November and December, and into next year. Fish will help lead several weeks of offseason training at the USTA Training Center – West in Carson, Calif., with a group of professional men. Craybas will begin working with a group of pro women during their offseason training at the USTA Training Center in Boca Raton, Fla.

The coaching partnerships are initial steps in USTA Player Development’s effort to be more deliberate in engaging past champions and former American professionals as coaches, advisors or mentors. In addition to Lendl, Fish and Craybas, USTA Player Development has also worked with or is planning to work with other former and current American pros, including Michael Russell, Brian Baker, Marianne Werdel and Ann Grossman-Wunderlich, among several others.

“We have done this on an informal basis – Andy Roddick, Jim Courier and Billie-Jean King, most notably, have been very generous with their time and willingness to work with our young pros – but we need to be more intentional about our outreach to former champions and top professionals,” said USTA Player Development General Manager Martin Blackman. “They have been in the second week of a Grand Slam or even hoisted the trophy on that final Sunday, and that is invaluable. We need to cultivate a culture that is characterized by a champion’s mindset, and when one of our young women or men spends time with a former champion, it creates a cultural connection that cannot be over-estimated.

“We are just in the beginning stages of our outreach, and there are American champions that we have not yet connected with, but so far the response has been overwhelmingly positive.”

Lendl, 55, is a former world No. 1 who won three US Open, three French Open and two Australian Open titles from 1984-90, and his 94 ATP World Tour titles rank second all-time. From 2012 to early 2014, Lendl coached Andy Murray to his first two Grand Slam singles titles, at the 2012 US Open and 2013 Wimbledon. Fish, 33, climbed to No. 7 in the world in 2011 and won six ATP World Tour titles in his career. He retired following a second-round finish at the 2015 US Open. Midway through his career, Fish committed to a disciplined approach to his conditioning and nutrition, which resulted in his best achievements and career-high ranking. Craybas, 41, played on tour for 18 years and represented the U.S. in the 2008 Beijing Olympics. She won one singles title and five doubles titles on tour and won the NCAA women’s singles championship while at Florida in 1996.