“The Hand”Â  that Rocked the 2003 French Open Confesses

Justine Henin gave a very lengthy interview to Belgian TV in which among the many revelations Â she admitted that she lied in the now infamous â€œhandâ€ incident in the 2003 semifinal of the French Open against Serena Williams where Henin raised her hand to signal she was not ready to receive Williamsâ€™ serve. Williams netted the serve and thought she would be allowed to replay the serve but the umpire did not see that Henin had raised her hand and Henin did not admit that she did.

â€œI think she saw it and she was disturbed by that,â€ she said. â€œThere is a lot of tension, actions are a bit by instinct. So itâ€™s true that it is not the best memory. If I had been convinced that she had seen it, had been bothered by it, I might have reacted. But you react on instinct. At the same time what happened was magic. I donâ€™t know if that changed the match. I hope Iâ€™m not saying that in bad faith.

â€œMaybe it was a way to give me respect, because you know that Williams have an attitude, sometimes difficult. They play with a lot of intimidation. know that the Williams had attitudes that were sometimes difficult. Today, it doesnâ€™t scare me any more. When they walked on the court, the other one was already there at her side. It was a big moment in my career, in the history of Roland Garros, too. That handshake, the start of a long story between us, but I think we kept mutual respect. Not one of the warmest moments in the history of tennis, but still remains a great memory.â€ (Translation from Tennis.com) 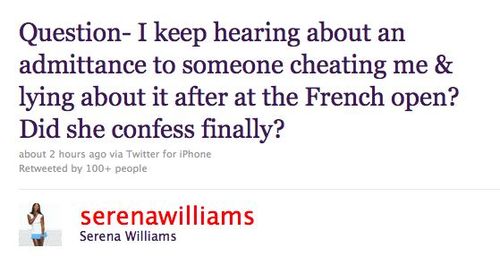 Giving the Boot to the Boot 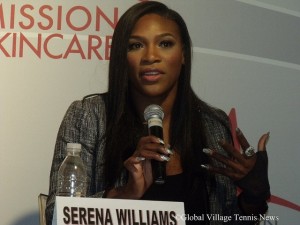 Serena Williams announced on her twitter account that her boot is off. However, earlier in the week she had to give the boot to playing in the March 8 Nike Clash of Champions exhibition in Oregon. Victoria Azarenka will take her place.

World No. 1 Rafael Nadal willÂ  play the opening night session at the Sony Ericsson Open on Saturday, March 26 at 8:00 p.m.

Former top ten player Paradorn Srichaphan reports that he and his wife, the former Miss Universe Natalie Glebova split since July after three years of marriage. Despite the break-up the former couple will still continue their business relationship.

World No.11 Mikhail Youzhny has called it quits to Davis Cup participation as he wants to spend more time with his family and recovering in-between tournaments.

Tennis Panorama News will be covering all the action at the “world’s most famous arena” on Monday, February 28 with Andre Agassi, Pete Sampras, Ivan Lendl and John Mcenroe. Look out for reports on the web site and live reports on our twitter account @GVTennisNews.

TPN will be covering the US vs Chile Davis Cup tieÂ  in Santiago with reports from a couple of the “NetHeads” – a group ofÂ  tennis fans who cheer for the US Davis Cup team.

TPN will also be at the BNP Paribas Open at Indian Wells.

Tips to Enjoying the BNP Paribas Open at Indian Wells

TPN was just in Memphis and its coverage and twitter received a mention in the recent edition of USA Today’s Net Post.

World Doubles No. 1 Dulko has captured her fourth WTA singles title with her Acapulco win.

Zvonareva wins her first tournament in more than a year.

Djokovic remains perfect on the 2011 season with his destruction of Federer.

Del Porto wins his first tournament since the 2009 US Open and enters the top 100.