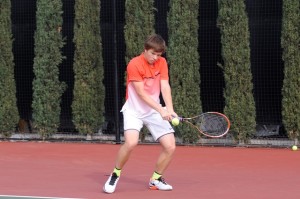 The No. 6-seeded 17-year-old from Pembroke Pines, Fla., hopes to draw from his past experiences winning a Futures final in Belarus in October and reaching the final in three others so far in his young career. Kozlov made quick work of top-seeded Tennys Sandgren, 6-1, 6-1, using a solid all-court game and serving eight aces during the one hour, 11-minute semifinal played on a cool day under cloudy skies.

You wouldn’t blame Sandgren for being a bit distracted as he had earlier learned that he had gotten into qualifying at the year’s first Grand Slam the Australian Open and was anxious to get to LAX and board a late flight in preparation for the start of qualifying on Wednesday. Sandgren was also not 100 percent healthy as he had stubbed his big right toe during his quarterfinal match on Friday.

“I didn’t realize it until near the end of the first set that he was limited in his running,” Kozlov said. “It’s been a good week so far for me and now the final tomorrow. I couldn’t go to Australia because of my ranking but I’m happy to be here. I could have stayed in Florida and played the Futures there, but I love SoCal and playing here.”

Eighteen months ago, Kozlov turned heads by making it to the final of the $100,000 USTA Pro Circuit Challenger in Sacramento, Calif., losing to former Top 20 player Sam Querrey. By reaching the Sacramento final at age 16, Kozlov became the youngest American to reach a Challenger final since Andre Agassi in 1986.

Kozlov’s final’s opponent will be No. 4-seeded Philip Bester, who is poised to break into the world top 300 after a solid week in Los Angeles. Bester got past former UCLA All-American Clay Thompson on Saturday, 6-3, 6-3, in the other semifinal.

Canada’s Bester had a 1-1 career record against Thompson heading into the match having lost to him in the Vancouver Challenger, and then beating him a few months later at Sacramento.

“I knew he would come out firing,” Bester said. “He has a big serve and big forehand so I had to try and neutralize that as much as possible.”

Bester has never faced Kozlov but is well aware of his game. “I know he’s young and up and coming,” he said. “I just have to use my experience and keep playing like I have all week. I just need to really go out there and compete because it’s the last match of the tournament.”

Like Kozlov, Bester said he enjoys playing in Southern California, and even entered and won last year’s Open money tournament at the 115th Ojai Tennis Tournament. He said he’d love to do it again if his schedule is open and said the prize money came in handy and allowed him to travel into the summer. “I’ve been in touch with Mark Weil up there and just really love it there,” said Bester, who beat former touring pro Lester Cook in the final at Ojai. “If it works out to make my way up there again, I will definitely do that.”

Sunday’s singles final is scheduled to begin at 11 a.m. and admission is free to attend.