You are here: Home / Front Page News / Michael Mmoh Moves Into the Semifinals of the Long Beach Pro Futures Tournament 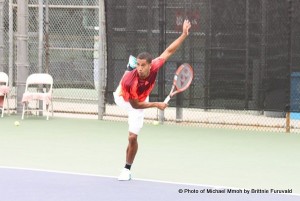 On Friday in the $25,000 USTA Pro Circuit tournament, Mmoh came back to beat 19-year-old Carson, Calif., resident Deiton Baughman, 4-6, 6-4, 6-4, in the quarterfinals. Mmoh will face No. 8-seeded Daniel Smethurst of Great Britain in the second semifinal on Saturday. In the first semifinal starting at 11 a.m., No. 3-seeded Eric Quigley will face Germany’s Yannick Hanfmann.

Weiner, who turns 40 in April, is a former USTA No. 1 junior and ATP touring pro who moved with his family to Long Beach from Johannesburg, South Africa, when he was 9-years-old. His mother still lives just a mile from the site where the tournament is taking place and Weiner has stayed at her house all week.

Weiner attended Poly High in Long Beach and played high school tennis his freshman year before moving on to the Nick Bollettieri Academy in 1992 at age 15. Because he lived across the street from Long Beach State, Weiner started taking lessons at age 11 from a 23-year-old unknown coach at Long Beach State named Peter Smith.

Smith’s junior academy is run out of the El Dorado Park Tennis Center and Smith is helping run this week’s tournament along with director Cathy Jacobson-Guzy. The way Smith tells it, he had no choice but to started teaching the young prodigy Weiner, who at one point was the No. 1 12-year-old in the USTA national rankings.

“It was literally my first week on the job and I get this call from Glenn’s mother and she says she wants me to work with her son, and she’s not going to pay me,” Smith said. “So I think I’m just going to put her off. But a week later she called back and said I hadn’t called her back. She said, ‘Well, have you come up with an answer? Will you do it?’ And I said yes.”

So Smith started hitting with the 11-year-old Weiner once a week and soon after it turned into every day for two hours a day, although he was by then getting $15 an hour, half his normal rate. “He was really the first kid I ever worked with,” Smith said. “I still think he hits his forehand like me, which I don’t think is a great thing.”

“He was my coach. He was my guy,” Weiner said of the current USC men’s coach Smith. “He really took care of me and developed me.”

After four and a half years together, the two parted ways as Smith took the coaching job at Fresno State, and Weiner decided to accept a scholarship to attend Bollettieri’s.

Weiner turned pro in 1994 and had shoulder injuries that sidelined him early on. He got to as high as No. 119 in the world in 2004 and retired shortly after.

Weiner, who has worked and traveled with Mmoh for the past two years, has also coached pros like Kei Nishikori and Philip Bester and has been an IMG Academy coach for the past nine years.

Smith smiles at the irony of seeing his first junior student now, who played junior tournaments at El Dorado Park close to 30 years ago, enjoying a successful career as a top-level coach.

Weiner said he feels a little guilty coming to work at a place where he feels so comfortable. “Some people have come up to me and said they remember watching me play here,” Weiner said.

In the doubles final Ireland’s David O’Hare and Great Britain’s Joe Salisbury lived up to their top seeding to beat No. 3-seeded Evan King and Raymond Sarmiento, 6-3, 7-6 (4). The winner’s split $1,550 while the runner-ups received $450 each.