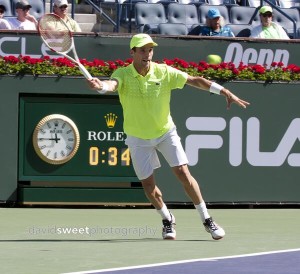 The Spaniard, who won his third career ATP World Tour title, knocked out two-time champion John Isner in the quarterfinals and saved a match point in his victory over No. 2 seed Jo-Wilfried Tsonga 3-6, 7-6(3), 6-4 in the semis.

“I feel so happy,” said the world No. 25 after the match. “I think I had an amazing week. I had plenty of good wins, played wonderful tennis here. I feel sorry for Jack and I want to congratulate him because he had a really great year last year, and I want to wish him luck for the rest of this season.”

Sock defeated four-time Auckland champion, world No. 8 David Ferrer in the semifinals, his second top ten win of his career.