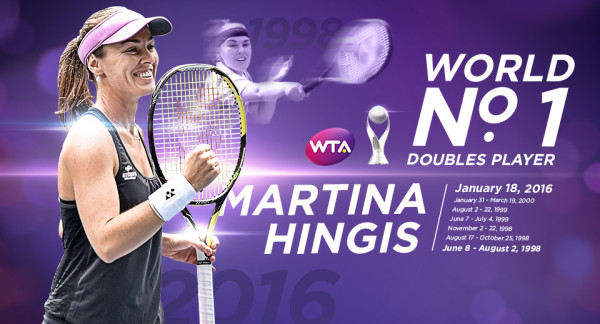 (January 16, 2016) Following a championship run at the Apia International Sydney, Hall-of-Famer Martina Hingis has returned to doubles co-World No. 1 alongside partner Sania Mirza. Hingis first climbed to the doubles No.1 ranking in 1998 at the age of 17 – she most recently held the top spot in March 2000, nearly 16 years ago.

“It’s a really nice feeling having the ‘No.1’ ahead of your name,” said Hingis. “It’s definitely something I was aiming for and with Sania, I felt like I had the opportunity to get there. When she became No.1 in Charleston I was just as happy as if I did it myself. I think being the No.1 team for the last ten months – we’ve proven to win two Slams and the [WTA Finals] – we definitely belong there. It was just a question in time to get that No.1”