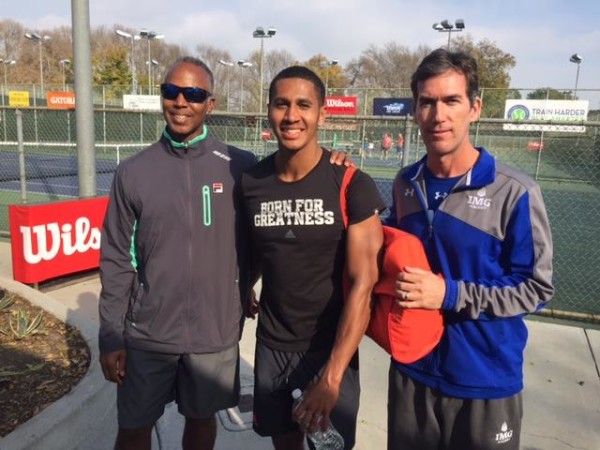 The 24-year-old Hanfmann, who graduated last May with a degree in International Studies, beat fellow college graduate Eric Quigley, 6-2, 6-2. The No. 3-seeded Quigley, who obtained his Communications degree from the University of Kentucky in 2012, suffered from food poisoning late Friday night, and didn’t feel 100 percent on the court.

“He was out there really suffering,” said Hanfmann, who said a former Trojan teammate let him know Quigley had a rough night. “You want to have a competitive match and it was just tough for him. You have to go in prepared like nothing’s happened and it got into my head a little bit and mentally my level was down a little.”

Hanfmann, who was top-seeded in qualifying last week at USC winning three rounds before falling in the second round of the main draw, gained direct entry into the Long Beach Tournament in part because of withdraws from Tennys Sandgren and Mackenzie McDonald.

“I like it this way better,” said Hanfmann, who has won two Pro Futures titles, both $10,000 events in his native Germany. “Not having to qualify does make things easier for me.”

Quigley will hang out in SoCal next week and train in Carson before heading off to the $50,000 Maui Challenger where he is in qualifying.

“I felt a lot better when I woke up this morning, but I didn’t have anything in me,” Quigley said. “He’s a tough opponent, he’s fast and he makes you hit one extra ball. I thought I had some chances on some return games, but he came through. I hope he goes on to win the title.

Mmoh outlasted No. 8-seeded Daniel Smethurst of Great Britain, 7-5, 6-4, and was watched by USTA Director of Player Development Martin Blackman, who was in Los Angeles on a stopover on his way to the Australian Open. “I thought I started out kind of slow, and had kind of a rough warm-up,” Mmoh said. “I like it here and this tournament has been really nice.”

For more information including draws and schedules, check out procircuit.usta.com.