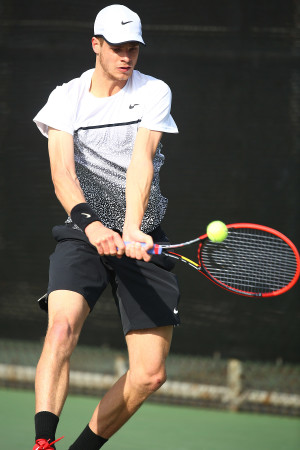 Many of the Long Beach fans who had watched the Bradenton, Fla., resident Mmoh all week were left shaking their heads in disbelief at the final-set score as Mmoh came up flat and couldn’t find any answers for Hanfmann’s big game.

“I was a little caught off at the start because I thought he would come out a little bit more aggressive and I got broken the first game,” said Hanfmann, who won $3,600 and 27 ATP ranking points. “It was a little bit weird. But once I settled in I thought I was able to play a little bit better than he did. I mean to win 4 and 0, you really don’t see that that often in the final.”

Mmoh hit four double faults to just one ace and looked lost as Hanfmann got stronger throughout the match.

“I felt like I wasn’t comfortable on the aggressive part of my game,” said Mmoh, who won $2,120 and 15 ATP points. “Yesterday I was aggressive and today’s I couldn’t hurt him. It was a good week here and I competed my way to the final, without even playing my best tennis.”

Hanfmann thinks Mmoh has the potential to make it big, if he can stay focused and aggressive. “I think he’s got a lot of weapons and I just told him I thought he played a little bit too passive today,” Hanfmann said. “Maybe he was a little bit nervous, but I think once he steps up and starts hitting that big forehand and good backhand and starts using his weapons, I think he can be really dangerous.”

Mmoh will be one of the young teenage Americans to watch as 2016 gets rolling in the world of tennis. Fellow 18-year-old Tommy Paul won a Futures tournament in Florida on Sunday, and another 18-year-old Taylor Fritz qualified for the main draw of the Australian Open over the weekend.

“Two years ago (Taylor) wasn’t that good a player, so it just goes to show you anything can happen through hard work,” Mmoh said of Fritz.

Hanfmann, who like Mmoh will travel next to Maui to play in the $50,000 USTA Challenger week after next, said he couldn’t ask for a better way to start 2016. “It means everything to start the year off winning a tournament,” he said. “I hope I can keep it going.”

For more information including final draws, check out procircuit.usta.com.