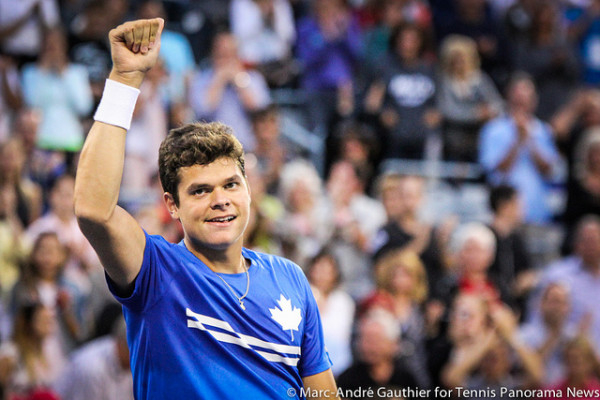 The Canadian employed an aggressive net game to take down the Swiss for the first time in their head-to-head encounters.

“I got to try to dictate, try to find my way forward and keep him out of rhythm,” he said.

Raonic dominated play in the first two sets and then the Swiss fought back to send the match to decider and get his first victory in Rod Laver Arena.

Raonic is 8-0 this year. Earlier in the month, he defeated No. 3 Roger Federer in the final of the Brisbane International.

Raonic credits the new member of his coaching team, former No. 1 Carlos Moya with the improvement of his game and composure.

“I think it’s just about a calm, and understanding how I can be more efficient with my game,” Raonic said. “Today was a good example of that.”

“I’m very happy with the way I played, the way I competed, the way I turned things around after sort of having the momentum against me going into the fifth,” Raonic said.

“I’m happy the situation I’ve put myself in. At the same time, as happy as I am, my mind’s already on what’s the process for my next challenge.”

“Tough match in general, for sure,” Wawrinka said. “I think Milos start really well. He was pushing, playing well. Wasn’t really feeling great there, not playing my best. Wasn’t moving to do something else. I’m surprised to still have went five sets.

“For me, I tried to fight like always, tried to find solution. I think he went a little bit down with his speed, with his movement. I took the opportunity to push him to the fifth set.

“But for sure I’m disappointed. I know I tried what I could today.”

“Today he did what I was expecting. Maybe he change few things in his game, but in general he’s the same tough player to play.”

“It was tough,” Monfils said. “I think I knew pretty much he will come and step in, try to play very fast. That’s what he did. I was a bit nervous so I could not hit through him for a while. Then suddenly I think I serve a bit better and I put more pressure. I grabbed the first set.

“Unlucky I felt in the second. I lost a bit the momentum because at this period I thought I had him. It was a bit tough for me to grip my racquet. Then it was a bit tougher to play.

“He had a good second set. Then I think I serve pretty good, try to focus on my first shot after the serve. Till the end, you know, I was fighting. I think he give me a good fight, so I was happy to come through.”

Talking about his next match against Raonic, Monfils said: “Milos is in good form. Coming in with a win in Brisbane. As we know, a big serve. Actually I think also a little bit he improve a lot his movement, hitting big from the baseline, a good return.”

“From what I’ve seen so far of him, he’s playing well,” Raonic said of his next opponent. “He’s very entertaining and he’s very difficult to play. He can give you complete ends of the spectrum within one game.

“So it’s very much of an internal match for me. I just have to take the game to him. I have to make him feel uncomfortable. Not let him get into his sort of playing comfort. If I can sort of keep up with the efficiency moving forward, I’ll have definitely some opportunities.”

Raonic has become the first Canadian to reach the quarterfinals of all four majors.

Andy Murray moved past local favorite Australian Bernard Tomic in the night session in Melbourne. The Scot  won 6-4, 6-4, 7-6 (4) in the fourth round.

“I didn’t think it was that straightforward,” Murray said. “It was a tricky match. You know, I mean, I got up a break I think in all of the sets. Each time he obviously got it back. So there were quite a few momentum shifts in all of the sets.”

Murray will play David Ferrer next.

“Last few days were very, very tough. A lot of emotions, yeah things sort of changing all of the time in my head,” Murray said. Two nights ago his father-in-law Nigel Sears was rushed to the hospital. Murray’s wife is expecting a baby near the end of the tournament. “It’s been a stressful few days, but I’ll try to rest up the next few days to get ready for the next one.”

No. 8 David Ferrer moved into the final eight of Melbourne for the sixth time, by defeating No. 10 John Isner 6-4, 6-4, 7-5. Ferrer has not dropped a set in the tournament.