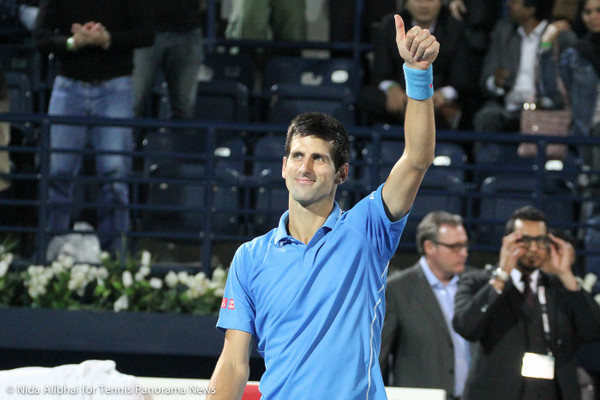 The victory gives Djokovic the edge in his head-to-head record against Federer for the first time at 23-22.

Djokovic started out dominant in the first set, winning it in 22 minutes. The 10-time major winner continued his mastery over his Swiss opponent in the second set in 32 minutes.

Federer came back to win the third set, hitting 18 winners past Djokovic. Federer earned a break of serve in the sixth game to take a 4-2 lead. After the conclusion of the third set, tournament organizers closed the roof on Rod Laver Arena.

Djokovic took control of the fourth set breaking Federer in the eighth game, holding serve in the ninth for game, set and match.

“Definitely I’ve played unbelievable the first two sets but that’s what is necessary against Roger,” Djokovic said in his on-court interview. “He’s been playing on a very high level at this tournament and he dropped only one set.

“I came out with the right intensity and executed everything perfectly. The two-set lead was comforting, but it was a battle in the end. At the end of the day, it’s important that your convictions are stronger than your doubts.”

“I’ve seen Novak play this well before,” Federer said. “It’s tough when it’s from the start because obviously you got to try to stop the bleeding at some point, you know. Because he returns very well, like Andre Agassi. He can get one or two sets all of a sudden. Those sets run away very quickly.

“Before you can really sometimes do something, you know, 45 minutes a lot of tennis is being played and it’s tough to get back into it. I found a way. Started to play better myself. Made a bit of a match out of it, which was nice.

“But still disappointed obviously that it didn’t go better tonight.”

Djokovic completed the two-hour and 19-minute match with 33 winners against the No. 3 seed.

Djokovic will play either No. 2 Andy Murray or No. 13 Milos Raonic for a chance to win Melbourne title number six and major title number 11.

“I’m going to enjoy my two days off,” Djokovic said. “I think it’s good for me at this stage. I’ve played a lot of tennis. Actually it’s going to serve me well for my recovery. Tomorrow’s match is going to be interesting to watch. Being in the finals and watching the other semifinals, of course it’s quite a joyful feeling.

“Whoever wins, I’m going to be ready for the great battle.”