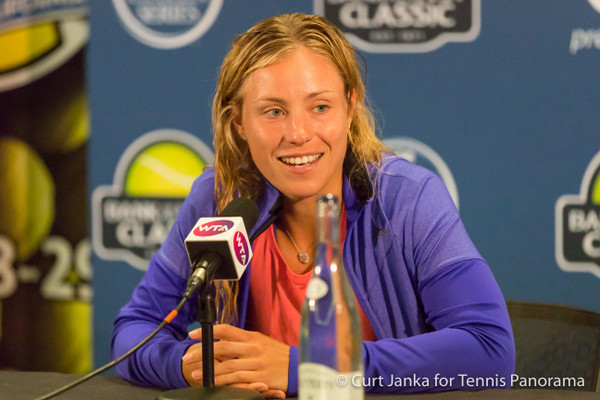 (January 30, 2016) A point away from being knocked out in the first round 13 days ago, No. 7 seed Angelique Kerber came back to win her match against  Misaki Doi and on Saturday surprised No. 1 seed and six-time champion Serena Williams 6-4, 3-6, 6-4 to claim her first major title, the 2016 Australian Open.

The last Australian Open Champion to save a match point on the way to the title was 2014 champion Li Na.

Williams came into the final as an overwhelming favorite to win her 22nd major and equal Steffi Graf for the most in the Open Era. Williams had not lost an Australian final before Saturday.

Conversely, with the victory, Kerber became the first German to win a major since Graf. Coming into Melbourne, Kerber was the only member of the Top Ten yet to reach a major final. The win gave Kerber her first win over a No. 1 player. She was 0-8 previously.

Kerber is the first lefthander to win the Australina Open since Monica Seles in 1996.

“I had goosebumps. My whole life I’ve worked hard. To say ‘I am a Grand Slam champion’ is crazy,” Kerber said during the trophy ceremony. “My dream has come true tonight”

A gracious Williams crossed over the net to congratulate Kerber at the end of the match, giving her a big hug. “Congratulations Angie,” Williams said. “You were the best player this tournament. I really hope you enjoy this moment. You truly deserve it.”

Kerber was consistent through the match hitting 25 winners to 13 errors. She made Williams run from corner to corner. Williams had 46 errors and 47 winners but her powerful serve was broken five times by the 28-year-old. This was only Kerber’s second victory over Williams, with the first one coming in Cincinnati in 2012. Williams leads the head-to-head record at 5-2.

“I was actually really happy for her,” Williams said in her post-match news conference. “She’s been around a really long time. We’ve had a number of matches. I’ve beaten her a lot.

“She played so well today. She had an attitude that I think a lot of people can learn from: just to always stay positive and to never give up.

“I was really inspired by that. So, honestly, she’s a really good girl. If I couldn’t win, I’m happy she did.”

“I was missing a lot off the ground, coming to the net,” said the 34-year-old. “She kept hitting some great shots actually every time I came in. I think I kept picking the wrong shots coming into it.

“But, honestly, it’s something to learn from, just to try to get better.”

“I had really crazy two weeks,” kerber said to media. “I mean, with the first round where I was match point down, and then with the win over (Victoria) Azarenka in the quarters. I never beat her.

“I knew before that I beat her once in Cincinnati, that I really must go out there to try to beat her again because she will not give it to me. It was a really great match from both of us.

“Yeah, really it’s a special moment for me.”

“I was trying to stay relaxed until the last point,” Kerber said. “The first set I played very well. The second set she was serving much better. The third set every game was really close.

“Then like 5-3, 5-4, and she was serving, so I was just telling myself, Okay, you breaked her before few times, so you can do it again. Just play point by point.

“When I hit the match point, I was just try to hoping to return the ball over the net. Just hoping, yeah, that I can make the ball and just going for it if I have the chance.