You are here: Home / Contributors / Fed Cup Canada vs Belarus: Out of sight, in everyone’s mind 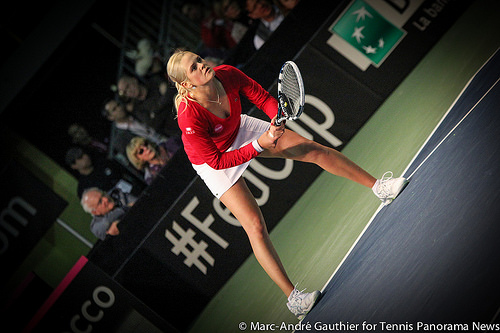 Fed Cup Canada vs Belarus: Out of sight, in everyone’s mind.

(February 5, 2016) QUEBEC CITY – It seems  as though year after year, the biggest story of the Canadian Fed Cup events in Quebec City lies more in who doesn’t show up than who does. Last year, it was Eugenie Bouchard, who was yo-yoing between presence and absence for weeks before deciding to skip the World Group I encounter against the Czechs (Canada lost 0-4). This week, all eyes were on Victoria Azarenka, a two-time Australian Open champion and former No. 1, who had originally confirmed her intentions to show up in Canada but went MIA for most of the week. After a lot of uncertainty from the Belarus team captain over the week, it was confirmed at the draw ceremony held earlier today that Azarenka would not play this weekend in the World Group II first round between Canada and Belarus.

No official reasons were given for Azarenka’s absence, but a tweet from the Belarussian earlier this week was often brought back to the table: two simple emoji, one with an apparent fever and the other with a sad face. Both the press and public showed disappointment at Azarenka’s absence, and one may expect a lower crowd turnout at the Peps at Laval University.

While the Canadian team publicly stated that Azarenka’s absence doesn’t change anything for their preparation, they must be quite elated that their chances, which were very slim, got a bit better. Indeed, when highest-ranked Canadian Bouchard announced that she would skip the event to focus on playing tournaments to qualify for the Olympics (Bouchard later withdrew from her planned event in Rio played in two weeks), Canada had lost their only player ranked in the WTA top 300 singles rankings. With Belarus coming in with three players in the top 100 with Azarenka (14th), Olga Govortsova (74th) and Aliaksandra Sasnovich (99th), the hill seemed pretty steep.

All isn’t lost for Canada, as both Francoise Abanda and Aleksandra Wozniak, who are scheduled to play singles this weekend, have had inspired performances in Fed Cup in the past. At the same time last year, Abanda, who turned 19 on Friday, was on the rise and seen as one of the most promising junior players in the world. In Fed Cup, she played inspired tennis against Romania, beating top 50 player Begu and losing closely against Dulgheru. But a series of injuries and disappointing loses has seen the young Canadian drop more than 200 places in the ranking in the past 12 months. Nevertheless, she is talented, hits with a ton of power, and is passionate about playing for her country.

This is something Aleksandra Wozniak can relate to. The former top 25 player is trying yet another comeback from injury, as she was derailed off the courts for almost a year between September 2014 and August 2015. Through the past ten years, Wozniak has been a staple of the Canadian team: she is the player with the most ties played (34), most singles wins (31) and most overall wins (38) in the history of the country. A player who is usually pretty stoic and composed on court, she has always expressed more emotion when playing for her country, including in an emotional three set win against Slovakia on the same courts in April 2014. Canadian Captain Sylvain Bruneau will be hoping his players recapture some of that patriotic magic over the weekend.

Singles matches will start on Saturday with both Wozniak and Abanda looking to put their careers back on track, while Govortsova and Sasnovich, who both have had good success on indoor and fast surfaces, will be the clear favorites. Reverse singles and a possibly decisive doubles match will be played on Sunday and matches will start both days at noon Eastern Time.