You are here: Home / Contributors / Fed Cup Canada vs Belarus: Wozniak does it again 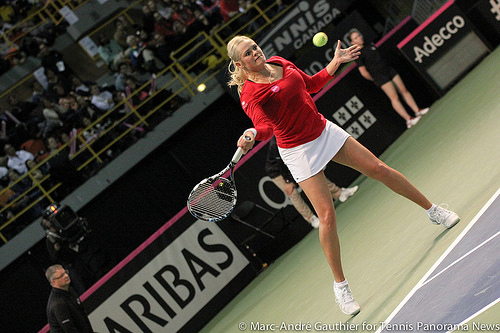 On paper, a lot separated Abanda, ranked 343rd in the world, to Sasnovich 99th . The Canadian, who had seen her ranking drop dramatically in the past year, had struggled with consistency in 2015. Her game, which is based on power and athletic abilities, can often derail into series of unforced errors due to intensity gaps. Nevertheless, she often played inspired tennis in Fed Cup in the past, seemingly inspired by the exuberant crowds and patriotic aspect of the competition.

Not much separated both players at the start of the first set. As expected, Abanda slipped into the role of the aggressor, moving Sasnovich around with heavy hitting from both sides. The Belarusian, who has had a lot of success in the past on indoor fast surfaces, went for a more conservative approach. After both players traded multiple breaks at the start of the match, Abanda got her first opening when, up 4-3, she was up 15-30 on Sasnovich’s serve. After three loose errors from the Canadian, the Belarussian held for 4-all and never looked back, wrapping up the set 6-4 in 41 minutes.

Abanda’s game seemed to settle in the second set, as she took an early 3-0 lead with more control on her aggressive tennis. On the other side of the net, the Belarusian struggled to move past her passive game style, giving the Canadian time to whip up multiple winners. The story continued until, after 35 minutes, the local player reeled off the last four points on two return winners and two double faults to level the match at one set apiece, winning the second 6-2.

The start of the third set saw both players finding their range simultaneously, giving the crowd higher quality tennis. While Abanda continued to put a lot of pressure on Sasnovich, the Belarusian decided to step up the aggression and move the Canadian around. Both players traded blows until 2-all, when Abanda took at 40-15 lead. Similarly to the first set, the Canadian couldn’t convert multiple game points and gave away a crucial break. This sent the momentum Belarus’ way, and after breaking again at 5-3, Sasnovich gave Belarus a 1-0 lead, concluding the 2-hour affair 6-4, 2-6, 6-3.

Asked on what made the difference in such a close match, Sasnovich replied: ”I played for my country, I played for my parents, I played with my heart”. For Abanda, she tried to see the positive in a close defeat to a top 100 player: “It was only a few key pressure points that made the difference. I want to play aggressive and I did. I have plenty more matches to go this year and some high objectives for myself, starting with tomorrow”.

The level of pressure on Abanda’s shoulders was relieved a bit by Aleksandra Wozniak, who leveled the tie by playing like her former top 30 self in a 6-2 6-2 win over Olga Govortsova. Flawless from the get-go, the Canadian confirmed her spot as the best Canadian player in the history of Fed Cup competition as she dismissed the highest ranked player of the weekend convincingly. Wozniak, now ranked outside of the top 800 in the world following one year away from the courts due to a major shoulder injury, controlled the match from the baseline in an impressive showing of aggressive-but-clean tennis.

“I’m so excited to be back playing Fed Cup, in front of the best fans in the world!”, she claimed in her post-match interview. ‘We had a great week of preparation and playing at home, it gives you that extra energy that is so important.’

Asked on what made Fed Cup special, she replied: “I never say no to Fed Cup and to represent my country. It’s a privilege. Tennis is such an individual sport, when you have the chance to play as a team, as a family, it’s special.” This may be seen as a comment directed to top Canadian Eugenie Bouchard, who has decided to skip Fed Cup this weekend to focus on her singles career. Wozniak, earlier this week, had mentioned that “everyone has a busy schedule, it then only becomes a personal choice.”

All with therefore be decided in the second and final day of the tie. Abanda is set to play first against Govortsova, while Wozniak will follow against Sasnovich. A doubles match will be played; teams would most likely be decided last minute, but Canadian players Dabrowski and Zhao, winners of the most recent PanAm games, were seen practicing on site following the singles matches. Play will start at 12pm EST at the Peps in Laval University, Quebec City.