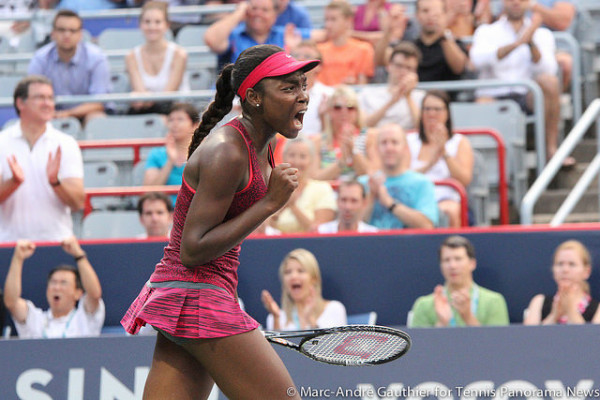 (February 7, 2016) QUEBEC CITY – It came down to the finish line, but Belarus pulled off the 3-2 win against Canada in their Fed Cup World Group II first round encounter played in Quebec City. Starting the day tied at one, Françoise Abanda gave an early 2-1 lead to the host team, before Aliaksandra Sasnovich won her second match of the week to force a deciding doubles match. The local duo of Gabriela Dabrowski and Carol Zhao then lost to more-experienced Sasnovich and Olga Govortsova to send Belarus into the World Group I play-offs. It was Zhao’s first ever match in Fed Cup.

While Canada is technically ranked higher in the ITF nations ranking, Belarus started off the weekend as clear favorites, despite the last minute withdrawal of their top player Victoria Azarenka. Both Govortsova and Sasnovich are ranked in the top 100 of the WTA rankings, while Canada had no players ranked in the top 300. Nevertheless, Aleksandra Wozniak, a former top 30 player coming back from injury, and Françoise Abanda, a former junior top 5 player, both have had inspired Fed Cup performances in the past.

First up were Govorstova and Abanda. Right from the start, Govortsova, showed better form than in her loss yesterday to Wozniak. The Belarussian would take control of the points early, keep Abanda on the move and finish off at the net, a fruitful strategy which gave her an early 4-2 lead. But errors then started to creep in, while Abanda took advantage of weaker second serves. The Canadian reeled off the last four games and won all eleven points on the Belarussian’s second serve to get the first set 6-4.

A similar story happened in the second set, when Abanda again came back from a 2-4 deficit to win 6-4, hitting spectacular winners, especially on the backhand side. After the match, the Canadian was especially proud to keep her aggressive tennis with a lower unforced error count, which was her downfall on Saturday. “I have an aggressive game, but my goal after yesterday was to cut down on the errors. I was calmer, more serene and more confident.” Her final stats were impressive, hitting 31 winners to 27 unforced errors, a notable improvement from her 43 errors from Saturday.

Asked about their similar game style, Govortsova agreed: “She seemed to like my game; she was comfortable with my shots. She would hit just as hard as I did.” Coming back from injury and having played only one match since October, Govortsova confirmed she was now healthy, but wasn’t feeling match tough: “I feel like I didn’t close out so many games. I haven’t played enough matches recently.” The Belarussian played herself a pretty clean match with even numbers of winners and unforced errors (24), but really struggled with her serve, hitting 9 doubles faults and getting broken six times.

All eyes were now focused on Aleksandra Wozniak to wrap up the win for the host nation. Playing in her 50th Fed Cup match, the Canadian gave a stellar performance on Saturday to defeat Govortsova and had experience on her side against 21-year-old Sasnovich. Both players started off the match solidly on their serve, as the first nine games were won by the server. Up 5-4, Sasnovich then requested a medical time out for what seemed like pain in her left thigh. This seemed to break Wozniak’s serving rhythm, as she started off with a double fault. Few points later, the feisty Sasnovich would wrap up the set 6-4.

This seemed to start a series of serving woes for both players, as four breaks decided the first seven games of the second set. Down 4-3, Wozniak saved four break points to level at 4-4 to the delight of the crowd, who could sense a possible comeback. But Sasnovich, who had lengthily discussed the emotional importance of playing for her country all week, played spirited tennis to hold easily and fend off a game point on Wozniak’s serve to wrap up the match 6-4, 6-4 on a forehand return winner.

The final doubles match was played between Gabriela Dabrowski, the top ranked doubles player in Canada, and her partner Carol Zhao, a top NCAA player, against Govortsova and Sasnovich, who was sent in last minute after her inspired play of the weekend. Right away, the Belarussians showed that they were more powerful off the ground, attacking the Canadians from all corners of the court. More crafty, both Dabrowski and Zhao tried to vary their shots and strategies, but too often were stuck with incomplete volleys. The duo from Belarus took an early 3-0 lead and never looked back, winning the set 6-2.

The different strategy from the Canadians started paying off in the second set, where they started serving better and finishing off more volleys. Despite going down an early break, the local pair stayed with the Belarussians until the end, when Sasnovich, the star of the weekend, served for the match and the tie at 5-4. Solid, as she was in her three matches, she served it easily, giving her country the win.