You are here: Home / Features / Top Seed Halep Falls Along with Three Other Seeds in Dubai 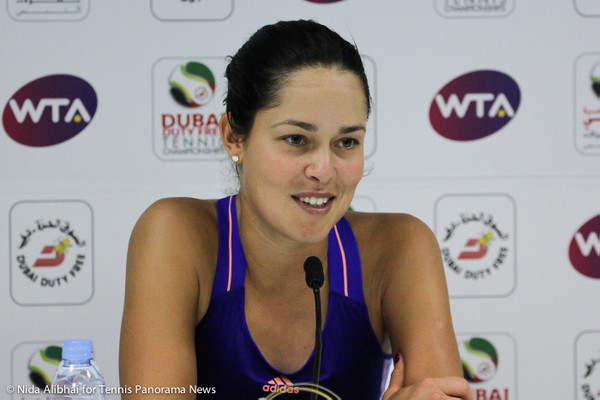 “I think it was one of the highest quality matches I have had in maybe the last year,” said Ivanovic. “I was very happy to get through, especially that I was down in that first set. I started a little bit anxious. I was rushing too much.

“But I was really happy I managed to calm down and sort of raise my level and win. I was really impressed with my movement. I lost a lot of close matches in the past, so it was nice to get this one done. I knew I had it in me, so I really believed throughout.”

Halep has suffered from injuries this year. “Yeah, was close,” said Halep. “First set I had set ball. I couldn’t finish, and then I lost a little bit of confidence and it was over. I think I was doing okay. I was aggressive. She played really well. She came back well. I served okay, returned okay.

“I’m disappointed that I lost but it’s okay. I feel good. Physically I’m okay. I have no pain anywhere. It’s good, and the most important thing is that I’m healthy.”

“I’m not really finding my game, so I think I have to rest a little bit and concentrate again and work hard and eventually come back to the tournament to play again,” said Muguruza. “I think I’m not really ready to compete. I need to work a little bit more. My shots, my fitness. So we’ll see. I think I just need to start from zero again and kind of forget these couple of tournaments, I guess.”