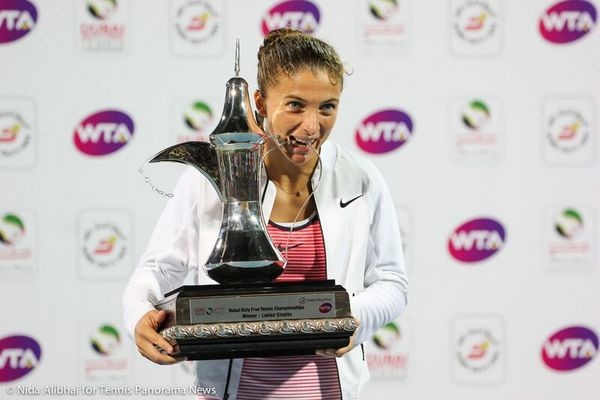 Errani almost did not go to Dubai after a lackluster beginning to the year.  “It’s unexpected title for me,” said Errani “We was thinking, oh, maybe to not come here, just stay home and recover and try to make it good. It was tough moment, tough year. So to win here is amazing.

“But we came here, and every day was really tough. Every match, from the beginning, from the 5-1 down in first round against Zheng, and even in the quarterfinal with Brengle, a lot of tough moment. But of course if we won a tournament, you have to pass a lot of also bad moments.”

“Maybe was not her best day. But of course I was just trying to be really focused and not miss balls, prepare that she will serve good, she will come to the net, she will try to change her game. Just try to be focused. I was trying to not think too much about it is a final, about it is tough match, but just try to play my game, stay there every point, even in the 5-1, 5-2, a lot of match point. Really happy in the end.”

“Everything (went wrong)” said Strycova. “I mean, this is one of the days where you try everything and then nothing is working.” “The funny thing is that I went on court and I didn’t feel really nervous about the match or something different. But I tried everything and I couldn’t put one ball in. I don’t know why, what happened, but it’s just sometimes how it is in tennis.”

“It’s been a great week, and I don’t want to like look at the final now that it was so bad,” the Czech said. “I mean, okay, that can happen and it’s a final, unfortunately, but it was a great week and I beat such great players, so I have to be happy about it and just to take the positive things from it.”

“I took so many things (from this week)” Strycova said. “I mean, that I can believe in myself and in my game even if it’s not such — if I’m not playing fast or I’m playing like tricky game, that I can beat anybody. To believe that you can do it, it’s good feeling. I beat Ana, which I never beat before. This gave me so much confidence.

“I also took from this week that I enjoy tennis again. It’s nice to play the sport.”

In a tournament where all of the top 8 seeds were dismissed before the quarterfinals, the doubles title went to the unseeded pair of Chia-Jung Chuang and Darija Jurak, who saved five match points in Friday’s semifinals, before winning 6-4, 6-4 over the second seeded team of Caroline Garcia and Kristina Mladenovic.