You are here: Home / Features / Djokovic Retires from Dubai Match with Infection in his Eyes 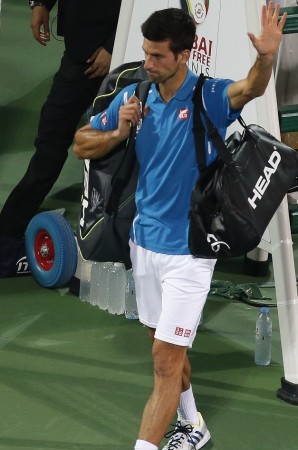 (February 25, 2016) Top seed Novak Djokovic was forced to retire with an infection in both eyes after losing the first set 6-3, which gave sixth seed Feliciano Lopez a place in the semifinals of the Dubai Duty Free Tennis Championships on Thursday.

“It’s an eye problem,” Djokovic said. “I have had it ever since I arrived to Dubai. Started with an infection and then severe allergy. That’s what I was told. It’s gotten worse in the last two days, unfortunately. It’s the first time that I have had such a problem with the eye. It was unfortunate. It was ultra sensitive today, the lights, and just wasn’t to be.

“I just hope that this problem with the eye will fade away in the next couple of days. I got a lot of important events waiting for me in the next period. Of course Davis Cup back home and Indian Wells, Miami, and of course clay court season.

“So, you know, physically I feel fine. Mentally, as well. It’s just something that I hope that is gonna, you know, vanish after several days, but in contrary, it was getting worse. I have to deal with it.”

“I was instructed not to wear contact lenses because of the fact that lenses are actually not helping this situation actually. They are making it worse. So I was wearing contacts only on the match yesterday night. And today, other than that, I was not wearing them at all.

“That’s all. You know, that’s all I can say. If I had a third eye I would, you know, play the tournament. I’m sorry that I’m talking to you now with my sunglasses at 10:00 p.m. It’s not a usual sight, but that’s what it is and just hoping it’s going to get better.”

“It’s very sad when you play against one of the best players in the history of the sport and he has to retire the way he did,” said Lopez. “He told me he had an infection in the eyes since a few days already. I had no idea and I just went on court without knowing about his illness.

“I felt that he was taking risks a little bit more than normal in some of the points that we played, especially when I made the break. Then he was trying to be more aggressive. Seems like he was not taking care of his shots sometimes. He was very aggressive where he normally don’t. So that’s why I kind of realized that something was going on.”

“Quite happy with the match today,” Warinka said. “Was feeling better on the court. Better tennis in general. I still had some up-and-down. Not always serving well, not always playing my best tennis, but in general it was a good match. I’m happy to get through in two sets. I start to feel much better physically, so it’s positive.”

“I wasn’t in the greatest shape,” Kyrgios said of the victory. “I was really surprised with the performance I gave out there today, to come out there and beat a quality player and in tough conditions. It’s probably my favourite win over the last couple of weeks.”

“We played on the same team in IPTL. That was actually really good. I got to know him a little bit more. He played great there. He’s one of the best players in the world, no doubt. He’s playing great tennis.

“I’m not going to do anything different,” Kyrgios continued. “I’m just going to go out there and see what happens.”