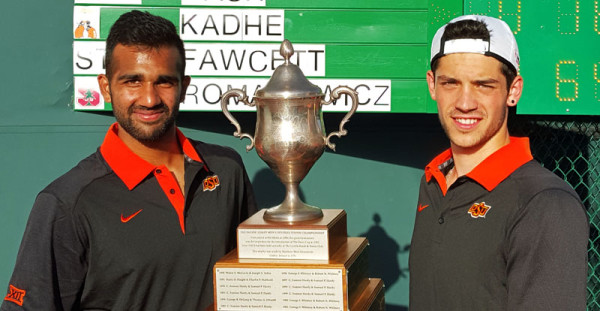 Competing in breezy but mostly sunny conditions, Cash and Kadhe used a combination of what Kadhe termed their “aggressive, big-serving, chance-taking” strategy to claim the straight-set victory.

“We like to keep the pressure on, so we’re always aggressive,” said Kadhe, “especially with our volleys and overheads. We like to put away every shot we can get to.”

The two All-Americans have played together for only two semesters at nationally-ranked No. 5 OSU. Cash, who hails from Great Britain, and Kadhe, from India, displayed powerful strokes and an uncanny knack for resilience in tense rallies.

The duo claimed the first set tiebreak 7-1. The decisive second set was clinched when Cash/Kadhe broke Fawcett’s serve to take a 3-2 lead, which they never relinquished.

“We knew the great history of this event coming in,” said Cash, “and we wanted to put our names up there with past champions like (John) McEnroe. When you play at this level, you know about the Pacific Coast and we knew we wanted to win it.”