You are here: Home / Contributors / Novak Djokovic on Maria Sharapova: “I do feel sorry about what’s happening with her” 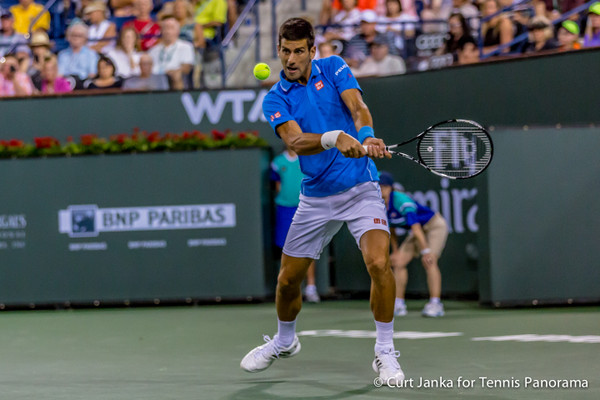 Djokovic was asked about his views on Maria Sharapova and her situation. The five-time major winner announced on Monday that she failed a drug test at the Australian Open. Sharapova tested positive for meldonium, a drug she says she’s been using for 10 years for different health issues. Meldonium became a banned substance in January under the WADA code.

“Well, it’s been the talk of the tennis world for the last couple of days, and this kind of news caught us all by surprise. I think I can talk about, you know, Maria and her situation from two perspectives, Djokovic said.

“First as a friend, somebody that knows her for a long time, of course I do feel sorry about what’s happening with her. I know that, you know, she has always been very responsible and aware towards herself, towards the sport, very disciplined, very kind of hard working, hard-working ethics, and love what she does.

“You know, she believes and still does believe that the hard work really pays off, and that’s what gets her titles.

“So as a friend, you know, I really hope that she will find the best possible way. I thought she was very courageous and was very human, brave of her, to go out and take the responsibility and say what has happened. She did admit that she made a mistake with her team, and I think, you know, you don’t have to blame ^ WADA for anything.

“It’s completely normal to expect that under these circumstances, you know, the player that has made this mistake has to suffer certain kind of consequences, and I’m sure she’s aware of that. She has approached this very maturely. I really admire that.

“On the other hand, from the different perspective, I talk as somebody that is involved in professional tennis and sport for so many years that always believed in clean and fair sport.

“So I do — I do hope that — I mean, obviously I can’t speak about the details because I don’t know. I know as much as you guys know whether or not she was aware of the changes. But certainly if there was a mistake and if she was caught to be positive on the doping for a certain substance, then there should be certain kind of, you know, consequences for that.

“But, again, I’m not here to talk about, you know, whether or not she needs to be away from the courts for certain periods of time. You know, I leave this to WADA and antidoping agency and, you know, organizations that are responsible for that.”

Djokovic admitted that he never heard about Medonium, the drug Sharapova took which was banned by WADA since January.

“No, I never heard of that medication,” he said. “Just one more thing I wanted to say, because I feel like in the sport in general there is maybe a conviction with many athletes that maybe medications and certain substances can make you feel healthy or, you know, feel better.

“I don’t believe in that kind of short-term process. I believe in long-term balance and harmonious health and well-being that is achieved, you know, with — from different aspects.

“I wouldn’t say that there is a magic potion or elixir that can make you feel better. No, I never heard about that substance.

“And regarding e-mails, I have to be frank that I don’t read them all. I do have the team of people that is working with me and that, you know, I have faith 100%, and if there is any significant changes that I need to be aware of, I am aware of. They do let me know.

“We communicate of course on a daily basis between the medical team, between the marketing team, or, you know, operational team. There is always something that needs to be discussed.”
“Now, I don’t know what the pros and cons are of this medicine, but it can happen to many people if it’s only a case of negligence, of Maria and her team of not really paying attention to the change,” said the world No. 1.

“Now, whether or not she was informed before or not, I don’t know that. I think the communication may be from the side of the governing bodies of tennis maybe should be a little bit better in terms of involvement of maybe ATP, as well, because I feel like maybe sometimes ATP is stepping on the side because it’s a matter of ITF and WADA.”

“I’m just saying there are maybe ways to improve the communication so that these things don’t happen in the future, because what has happened with Viktor Troicki was also something that was very debatable,” Djokovic said.

“I know him since I was seven years old, so I know — I know him like my own brother, so I can, you know, claim that he has never — has done or taken something that, you know, would be banned. Which he didn’t, as well. He was banned for 18 months for kind of refusing to give the blood sample that day, and he got the verbal confirmation from that lady that was working for WADA that he can do that because he was feeling bad.

“So because of this, you know, small certain situation and circumstances and negligence of somebody, you know, a player suffers for 18 months’ ban. Those kind of things, you know, need to be communicated better I think in order not to kind of damage the player’s career.”

Djokovic admitted that there have been times that he’s had a health issue and a doctor has prescribed something and he’s refuse to take the medication, because he did not know if it contained a banned substance or not.

Djokovic comes into Indian Wells dealing with health issues of his own over the past few weeks. He had to retire from a match in Dubai due to and eye infection. He played Davis Cup over the weekend and led Serbia to the quarterfinals.

“It was a couple of not easy weeks for me health-wise, but it was due to a lot going on on the court and off the court that, you know, caused maybe a weaker immune system that was more prone to those kind of infections” said Djokovic.

“Has happened first time honestly in my life to have some kind of an issue with an eye. Yeah, after that it was the Davis Cup. It was not physically very easy those three days, but all in all, I feel good. I feel already adjusted to the time zone of the West Coast. I have been here for already several days.

“You know, going back to normal. Hopefully I will be able to play at my best from the beginning.”

Djokovic comes into the tournament looking to win his fifth BNP Paribas Open title, which would set a record.