You are here: Home / Contributors / Venus Williams’ Return to Indian Wells Ends in a Loss to Qualifier Kurumi Nara 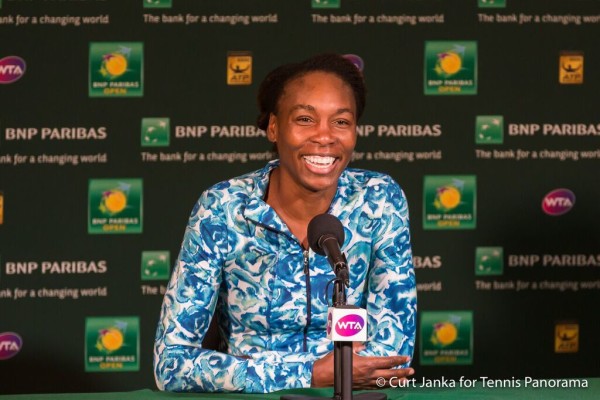 (March 11, 2016) INDIAN WELLS, California – After a 15-year absence, Venus Williams returned to Indian Wells on Friday to face Kurumi Nara. The qualifier from Japan ranked 89th in the world spoiled Williams’ return winning 6-4, 6-3 on Center Court to get her first win over the world No. 12.

Williams last played the event in 2001 when she and her father were booed and jeered at by fans in the stands after Venus withdrew from her semifinal against Serena with an injury as both were watching the final. Serena won the tournament. Venus Williams wrote about why she returned in the Player’s Tribune.

Walking on the court to thunderous applause in a half-filled stadium, the seven-time major champion acknowledged the crowd before she sat down, waving to fans in all directions and putting her hand over her heart.

“I did get emotional,” Williams said. “When we were doing the coin toss I got a little watery eyed. Your opponent, you don’t want to give them any more encouragement. It was wonderful. I think I smiled the whole warmup. I had to get my game face on. It was tough to do.”

“The crowd rooted me on because it was a tough day and tough conditions and brutal out there,” she said. “It was wonderful to feel the love. You know, I would love to come on back.”

Williams’ sister Serena made her return to the desert last year which influenced the older sister to return.

“I hadn’t really thought a lot about Indian Wells, playing here, until Serena thought she was going to come back,” she said. “That’s when I thought about it, obviously, after she played.

“So before that I hadn’t really — it’s not something I focused on, you know. In your life, especially when you try to accomplish things, you’re focusing on what you can accomplish, not on what happened ages ago.”

“I think what I felt was I want to be able to play well for everyone I think more than anything,” said Williams when asked about how she felt about the match coming into the tournament. “Obviously I saw Serena’s warm welcome. I just wanted to come out and play well and try to win that match.

“So I think that’s more than anything what I felt. But like I said, I was able to come and focus on the tennis. You know, I’m a person that’s not into the spotlight so much, so I guess such a warm welcome I actually felt a little shy.

“So, you know, it’s been a wonderful moment. You know, 15 years later to have such a joyous return is more than I could have ever. It’s such a blessing.”

A rare rain delay in Indian Wells came at 3-3 in the first set and the winds continued to be blustery throughout the match.

The wind played havoc on the 35-year-old’s game making 43 errors and hitting only 21 winners. Williams was only 4 for 12 on break points. 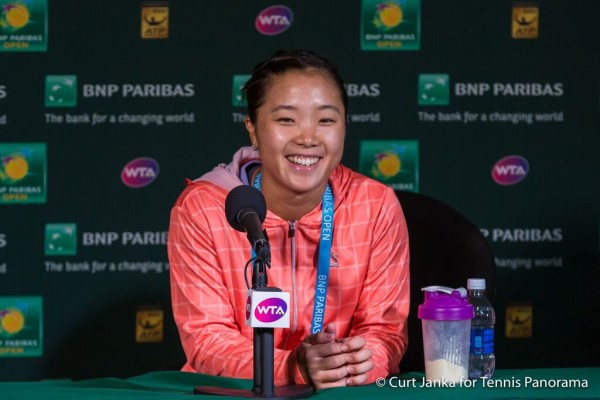 For Nara, it was her first victory over the seven-time major champion in three tries. The Japanese woman called it the “No. 1 win” of her career.

“Well, any time I have spoken up on issues is because I know the facts. In this case I don’t. I guess they are finding the facts now. That’s, I guess, a discovery period.

“So what can you say? What I do know is that in the past she’s been very competitive. I think she has been a role model for a lot of people. She has a ton of fans, and I think she’s affected a lot of lives in a positive way. Hopefully that will won’t be the end of that.”

“It was hard, rough out there,” said Williams about her contest with Nara. “She played really well. You know, everything was going for her. She’s very competitive. Everything seemed to be comfortable for her. Even the shank shots kept going in.

“I kept saying, How are these balls going in? Lord, how do I get some of mine in? And the conditions were really brutal. Just serving, it was tough. Not ideal.

“Thankfully it looks like it at least calmed down so when Serena gets out there it will be a tad bit easier. It was still a great day.”