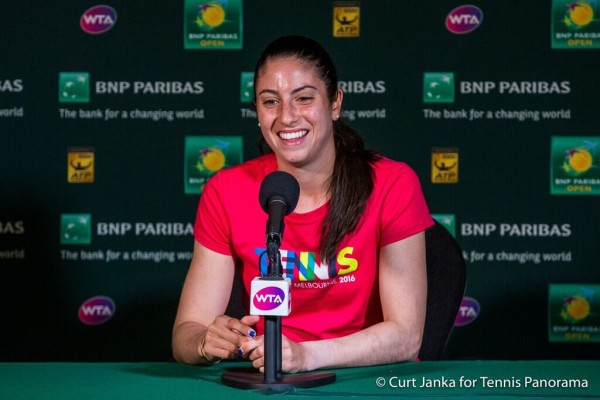 (March 12, 2016) INDIAN WELLS, California – There is something special about Indian Wells and Christina McHale. The 23-year-old ranked 62nd in the world, added to the list of falling seeds on the women’s side when she upset No. 4 Garbine Muguruza 7-5, 6-1.

The last time American beat a Top 5 player, it was No. 3 Petra Kvitova at Indian Wells in 2012.

“Obviously it’s been a while since I had a win like that, so it definitely feels really good,” McHale said.

“I think I did a good job today of just, yeah, staying playing point by point and playing really good defense, because obviously she likes to attack a lot.”

“I mean, I didn’t think it was four years ago,” she said. “For me it doesn’t feel like it’s been that long.

“But I think, yeah, obviously, you know, you have a lot of ups and downs throughout your career, and I hope that it won’t be another four years before I have another top-5 win.”

“Then the second one I think my energy went a little bit down and she kind of used it, you know, and went for the match.”

The Spaniard reached No. 3 in the world last year sparked by reaching the Wimbledon final.

The year McHale had her last Top 5 win in 2012 was also the year she achieved her highest ranking of No. 33.

“I feel like I have been working extremely hard, you know, all these years. Yeah, I think it’s a combination of being healthy and just getting a lot of matches in and kind of getting into a groove.

“But I think, yeah, it wasn’t like I felt like I was playing poorly these past couple years. I think I just had a few tight matches that didn’t go my way that maybe could have changed some things.”

“Every match I want to be able to produce my highest level, and that’s what I’m, yeah, working really hard on, on the practice court and the gym and everything, to, yeah, hopefully, you know, build on this, “ she said.

“There is a lot more tournaments throughout the year, so, yeah, I’m excited for everything that’s coming next.”

The next challenge for the New Jersey native will come in her third round match when she takes on 2011 U.S. Open winner Sam Stosur.

Other upsets took place on the women’s side including No. 2 seed Angelique Kerber falling to Denisa Allertova.