You are here: Home / Features / Victoria Azarenka Defeats Serena Williams to win Indian Wells, Will Return to the Top 10 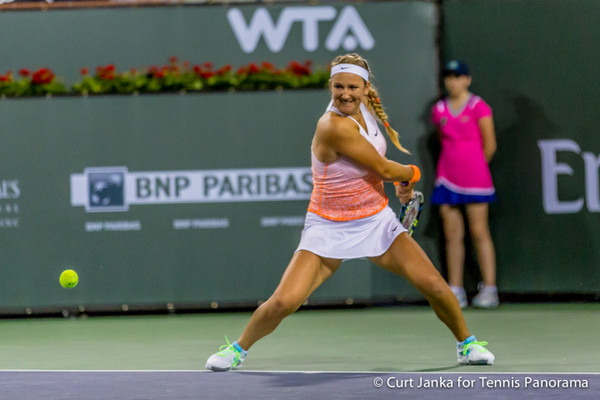 (March 20, 2016) Victoria Azarenka beat Serena Williams 6-4, 6-4 to win the BNP Paribas Open for the second time. The win moves Azarenka back into the top ten when the rankings come out on Monday. She was last in the top ten in August of 2014.

Azarenka broke Williams at love to start the match and held on to win the first set.

In the second set, Azarenka went up two breaks on Williams. At 3-0 Williams broke her racquet.

Azarenka took a 5-1 lead, but Williams won the next three straight games, having break points, when Azarenka served for the match a second time. The woman from Belarus held to close the match 6-4, 6-4.

Williams made 33 unforced errors during the match.

It was Azarenka’s first win over No. 1 Williams since she beat her for the Cincinnati title in August 2013. She move to No. 8 in the world.

Asked about reaching the top ten again, Azarenka said: “Feels good just to be able to, you know, see the work that I have put in and it’s paying off. But not just, you know, this year. Just everything that I have been through in the last years, it makes it more special.

“I was more aggressive. I started to use my serve the way I wanted to use my serve. Sometimes it doesn’t work necessarily, like couple of matches this week. But having that big goal in mind and going after it, that’s something that makes the momentum shift on the big stages.”

Azarenka, with the win became the first to beat Williams in four different finals.

“I’m very honored to play against the best player in the world,” Azarenka said. “That’s what I said on the court. I really mean that. She’s absolutely transformed women’s sport. Her and Venus brought something unique and lifted it up.

“You know, the power, the intensity, you know, the records that I’m pretty sure she’s gonna break at some point. But just to be able to watch that and get inspired, for me, that’s more important. I mean, I’m happy that I won and I’m going to — next time we play I’m going to try to win again, but just being able to play on big stages against the best player, that’s something that I want to do every single week.”

For Williams, this was her second year was back at Indian Wells after a 14-year absence which ended last year.

“Yeah, I think that overall was just really, really good. Obviously I didn’t win and that’s not the result I was looking for, but I think looking at the big picture it’s just I definitely didn’t expect to be on that stage again.

“The last time I was there (in the final in 2001) was probably the worst moment of my whole career. Not probably. Sure.

“To be back out there, which I never thought I would be, you know, was really different and special. You know, it was just — I was overwhelmed with, I think, emotions and nerves. Obviously I think everything kind of played a part.

“But for me it wasn’t about winning. It was just about, as Raymond said, coming back out here and doing well. No shade.”

Williams also addressed comment made by Tournament Director Raymond Moore that the WTA was riding the “coattails” of the men’s tour.