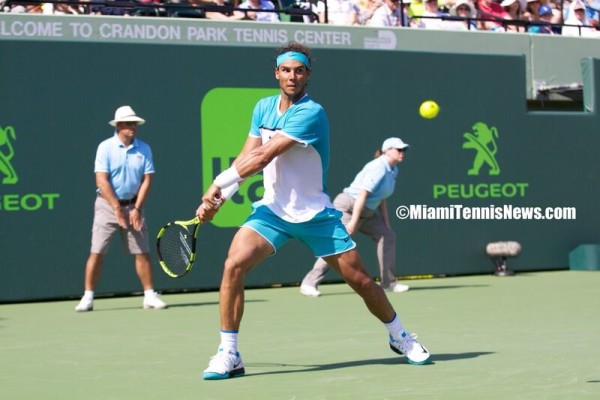 (March 26, 2016) Rafael Nadal retired from this match against Damir Dzumhur. Trailing 2-6, 6-4, 3-0 on Saturday at the Miami Open. The 14-time major winner had to call for the trainer three times during the match. It marked only the third time that the world No. 5 has retired from a match, the last time coming in the 2010 Australian Open.

Asked if the heat got to him, Nadal said to media: “Well, everything was fine until end of the first set. I start to feel myself not very good. It’s getting worse, worse, and worse, so finally in the second set I realize that I was not able to keep playing.

“I tried to resist, but I get a little bit scared to be too dizzy and lose a little bit…….
“So I call the doctor a couple of times, but I felt that I was not safe there so I decided to go. I wanted to finish the match, but I seriously could not.”

“Hopefully is nothing,” Nadal continued. “Hopefully is just the extreme conditions out there. Something happen, hopefully is the beginning of a virus, and in combination with the conditions I had this strange feelings.”

“Was tough for me because I felt myself I was playing well; I had good practices after playing a great week in Indian Wells.

“It’s a hard accident, but that’s life and it’s like this. If the health is fine in a couple of days, so nothing important is there — the most important thing is health than any tournament. If I am able to practice in a couple of days I know I was playing well and I hope to be ready for the clay.”

“Definitely not the way I wanted to finish,” said Dzumhur. “It was really tough to play today. I felt also really like tired, heavy, in some moments dizzy on the court. In the first set we played very long second game. After that game I felt like I cannot run that well.

“In the first set I really didn’t have chances. Between the first and second set I call medical. I was thinking really about retirement, but just said to myself, I’m playing big Rafa. I’m not having a chance to play every day these big guys. I want to enjoy this moment. So I tried to continue.

“I felt a little bit better after I started to run better, move better on the court, to play better shots. I had some chances. I used it in the second set.

“The third set, very important game was the first game in the third set. He was 40-Love up. I broke him. After that I guess he was not feeling the best. He probably felt the way I felt in the first set. Unfortunately he retired.

“But anyway, that was a big moment for me, that at least I could play with Rafa, and in the end, not the way I wanted, but I won.”
As for the biggest win of his career, although by retirement, the 94- ranked Dzumhur said:” I tried to keep the celebration in me because I didn’t want anybody to see that I’m celebrating when somebody retired.

“But inside of me I felt really proud after everything. I think all the fighting that I had through all the years back and today that I didn’t want to retire and I wanted to fight, that paid off.” 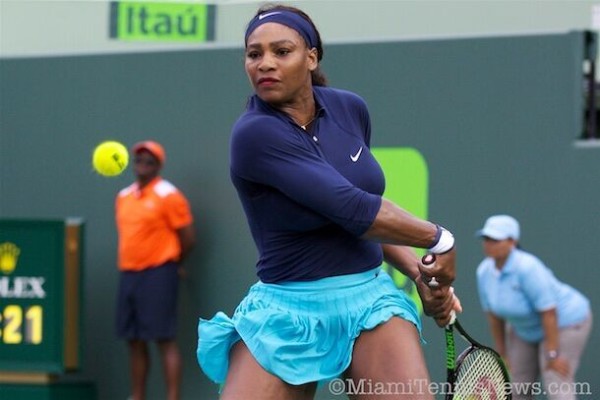 On the women’s side, eight-time champion Serena Williams beat the heat and won her 20th straight match at the Miami Open to reach the round of 16 beating Zarina Diyas 7-5, 6-3.

“For me the biggest adjustment I have to make is I usually never use a towel,” Williams said. “Here I might have to go grab the towel in between points.

“That’s it. I’m from California, but I been living here for over 20 years. I love these conditions actually.
“It was definitely humid today,” said the world No. 1. Rafa (Nadal) played like an hour and a half, two hours before me, so that makes a huge difference.

“So I think that he was in the most intense part of the sun; whereas I was kind of at tail end of it. But I was fine.”

Williams will play two-time major champion and friend Svetlana Kuznetsova for a place in the final eight.

“It’s a great matchup,” Williams said. “She plays well and makes a lot of the great shots. She’s actually been playing well this year. She had a couple big wins and couple good tournaments.

“Yeah, I have my work cut out for me. We’ll see what happens.”
No. 2 Andy Murray advanced to the third round with a 6-3, 7-5 win over Denis Istomin of Uzbekistan. The Scot, a two-time champion had a bit of an issue with a ball used in play, which appeared to be one of the balls the women use in the tournament.

“It was just a women’s ball,” he said. “I saw it just before I was about to serve. It’s quite off putting because I just missed two balls long. I didn’t know if that was one of the balls I used in the last couple points. The women’s balls are very different to the men’s balls. They’re much quicker, smaller, livelier.

“Yeah, when you’re just about to serve at break point down, you know, you don’t want to be using a completely different ball.

“So I was just a bit frustrated with that because I didn’t know potentially if on of the points before I had used it or not.

“It’ll be a tough one,” Murray said of his third round match against former top ten Grigor Dimitrov. “He’s obviously a top-quality player. He had a good win today, a tough win, against Delbonis.

“I know I’ll need to play good tennis to beat him. You know, also be a little bit more disciplined than I was tonight.”