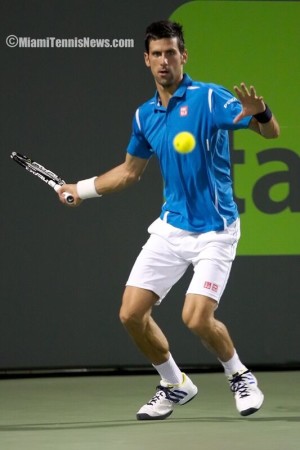 (March 29, 2016) In a match closer that the score indicated, Novak Djokovic advanced to the Miami Open quarterfinals on Tuesday with a 6-3, 6-4 win over 14th seed Dominic Thiem of Austria.

Djokovic who is now 25-1 on the year is seeking his fifth Miami title in six years and three in a row.

The Serb fought off a game youngster in Thiem, fighting off 14 of 15 break points.

“He came out with a good game plan,” Djokovic said. “He’s young. He had not much to lose. He was confident obviously winning a lot of matches this year. He was motivated to win. I could see that. It was a straight-set win, but far from easy. It was a tough match.”

“It is exciting, because tennis definitely needs the next generation of young players who are playing the way Dominic does and challenging the best players in the world,” Djokovic continued.

“It’s normal evolution in life that sooner or later we’ll — the time will come for all of us, and we need some new faces and players that are able to follow and lead the tennis world in the future.

“So Dominic is one of the leaders of this generation, no question doubt about it. He’s already established himself as a top 20 player last couple years. He’s getting stronger and more confident.

“It’s a process for every young player to really develop and understand what it takes mentally, physically, emotionally, to get to the top of the world and win major titles. It’s a long road ahead for him and for everybody else, but definitely they are on the right track.” 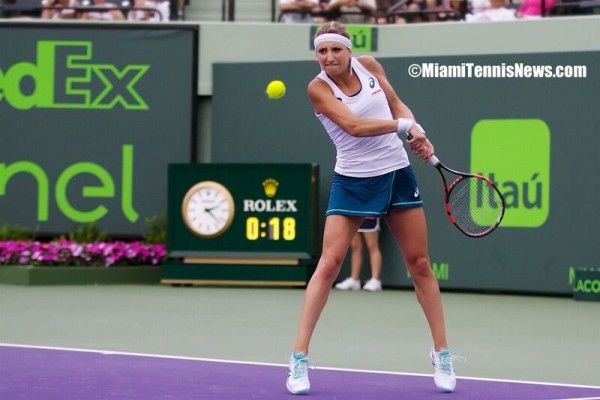 The women’s upsets continued at the Miami Open on Tuesday when No. 5 seed Romanian Simona Halep lost to No. 19 seed Switzerland’s Timea Bacsinszky 4-6, 6-3, 6-2 in the quarterfinals.

The Swiss player backed up her defeat of the No. 3 seed Agnieszka Radwanska in the fourth round for her second straight win over top five players.

It marked the first time that Bacsinszky had even taken a set off of Halep.

For the Swiss, it’s been five years since she last made an appearance at Key Biscayne and this year, making the semifinals is by far the longest run she’s made in the tournament.

After Halep took a tight first set, Bacsinszky jumped out to a 3-1 lead in the second set to take control. The Swiss notched two breaks early in the third set to go up 3-0 and never had to look back.

After her first service break in the second set, rain halted play for 10 minutes.

Between Bacsinszky’s effective use of the slice, movement and varied game, put her opponent off guard throughout most of the almost two-and-a-half-hour match.

“Well, in the second set I think I was pushing her to play long rallies,” she said. “I was like probably trying to hide where I was playing; then she was like — she couldn’t be able to guess if it was on the backhand or the forehand.

“Then it helped me a lot for the third set. I raised then probably my intensity at the beginning of the third set and it made a big gap between us.”

With Halep out, the only top ten seed left in the women’s draw is No. 2 Angelique Kerber.

“So for the next match, I mean, obviously for sure it gives me a big confidence to have those two wins, but it doesn’t change that I’m going to have a fierce opponent and it’s going to be tough.

“I just hope I’m going to be able to play well — I mean, not especially well, but be efficient in the next match. Hopefully I win the last point. If not, then it’s okay. I’ll try for the next tournament.”

Bascinszky will next play Russian No. 15 seed Svetlana Kuznetsova for a place in the finals.  In a topsy-turvy match, Kuznetsova defeated Ekaterina Makarova 6-7(3), 6-4, 6-4 to reach the semifinals.

In the first set Kuznetsova lead 5-2, 40-0 and also served for the set at 5-4 but could not close the set when errors crept into her game, especially on her powerful forehand side. Makarova took advantage and won the set in a tiebreak 7-6(3).

Kuznetsova was broken serving for the second set at 5-3, but broke Makarova right back for the third break in the set to even the match at one-set all.

The two-time major winner started off the third set, digging out of a break point to hold then break for a 2-0 lead. Makarova got the break back in the seventh game drawing closer to her countrywoman at 3-4. Kuznetsova battles for the break back and served for the match at 5-3. This time the 15th seed held to close out the match in two-hours and forty-five minutes.

For Kuznetsova, who won the Miami Open in 2006, this will be her first trip to the semifinals since 2009.

Only one of the top 12 seeds remain on the women’s side of the draw and that’s No. Angelique Kerber.