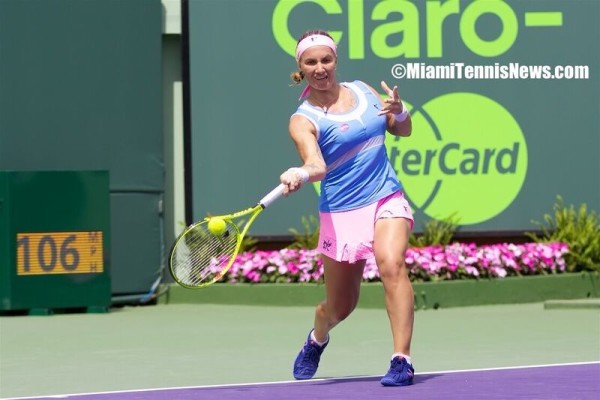 (March 31, 2016) A pair of former Miami Open winners and two-time major champions have reached the women’s final. Svetlana Kuznetsova, a 2006 winner of the Miami Open held off Switzerland’s Timea Bacsinszky 7-5, 6-3. 2009 and 2011 Key Biscayne winner, 13th seed Victoria Azarenka gained a little revenge from the Australian Open by beating No. 2 Angelique Kerber. Kerber beat Azarenka in the quarterfinals of Melbourne and went on to beat Serena Williams in the final to capture her first major title.

Kuznetsova knocked out eight-time champion Serena Williams in the fourth round of Miami and survived four straight three-set wins to reach the semifinal.

The 30-year-old Russian at No. 19 in the world has become the lowest ranked finalist since 2005, when No. 38 Kim Clijsters won the Miami title.

Should Kuznetsova win the title, she would return to the top ten. She talked about her tournament so far.

“I just take match by match and I just go,” she said. “It’s one more match. I’ll play with another amazing opponent. I had great wins this week, but one match, it’s a lot. It’s almost like everything. It’s great, you know.

“I start really well playing in Sydney, and then Australian Open didn’t happen to me to play good there. But I still felt I was in good level. Then I kind of mess up with Fed Cup and all that results. It was not good for me.

“I didn’t feel going in that good shape going to the U.S. swing. I was not feeling confident at all. After I had a loss in Indian Wells I tried to work a lot and training every morning a lot just to get confidence back, get my fitness.

“I’m doing better. I’m appreciate, I am blessed I have my body to play so many years and to win against good players, top players. It’s great when things come together. Either way, it’s not the end of the world, but it’s a great week. I’m really pleased and happy the way I fight through all these tournaments and weeks and players.”

On-court after the match, the former French Open and U.S. Open champion said she was happy wrapping up the match in straight sets.

“I am happy that I could hang in there and never let my hands down,” said Kuznetsova.

“I’m happy I’m still able to play against the best in the world. I was praying to finish it in two sets so I would have a little more time to rest.”

Azarenka advanced during the Thursday night session, improving her record this year to 21-1, not dropping a set during the tournament. Should the Belarusian win, she’d become only the third woman player to win the Indian Wells – Miami double in the same year.

Both Azarenka and Kerber produced hard-hitting shots with very exciting rallies. Azarenka had her serve broken, serving for the match at 5-4 in the second set but won the next two games to close it.

“Vika, she is doing amazing,” Kuznetsova said about potentially playing her in the final. “She is extremely prepared. Playing really confident taking all her chances.”

Azarenka is 4-4 against Kuznetsova in head-to-head competition. The last time they faced each other was in the quarterfinals of the 2013 Australian Open. Azarenka won the match and went on to win her second straight Melbourne crown. 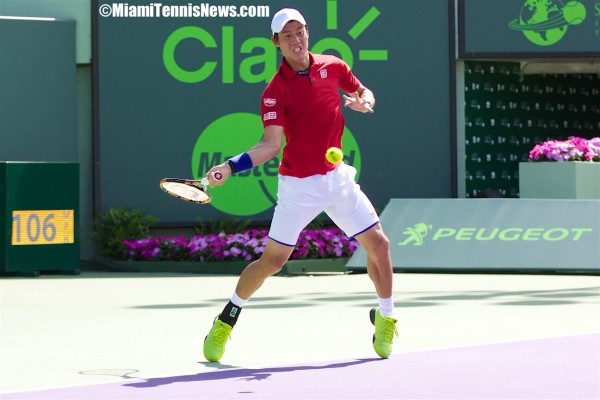 Nishikori was down 4-5, 0-40 before fighting off the Frenchman.

“I was up a break and I had many chances to break again, you know, second time,” said the top player from Japan.

“You know, I just try to focus when I lost the game for 4-All. Actually, I knew something like that was going to be happen, so I was kind of ready and like 50/50.

“But when I was down 4-5, Love-40, I thought, All right, that’s it. Especially the last couple games I wasn’t serving well, so that was — I thought it’s going to be tough to come back. I tried to play one point at time. Yeah, I thought I have to hit the ball to win the points, and I did. 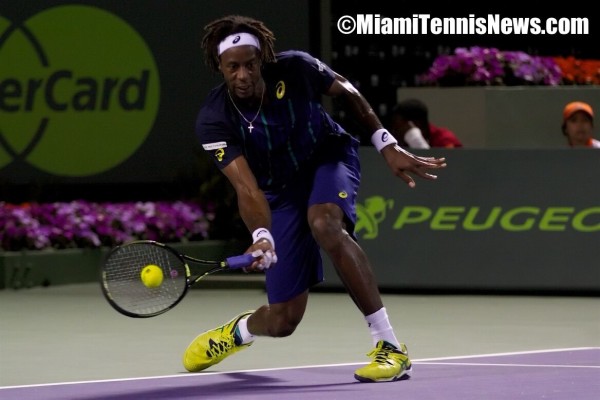 “Then I think at 3-4 I really raise my level,” Monfils said. “I think I start to be very aggressive, start to go for it, and still had the strong feeling that I can make it.

“At the end, I think I push very hard. Then definitely I have opportunity it close it out, but actually Kei played strong. He fought well.

“Actually, I think in the breaker he was just better than me.”

Kyrgios talked about playing Nishikori next: “Obviously Kei is one of the greatest players in the world at the moment. He has an unbelievable return of serve, moves unbelievably fast, hits big from the baseline, doesn’t have many weaknesses.

“When I played him in Shanghai I didn’t really do too much wrong. I played a great match the whole time and he just played a really well in the big moments. I definitely had chances.

“I know what my game plan is going to be. It’s going to be a tough match, but I’m looking forward to it. He’s a great guy.”

For his efforts in Miami, the young Australian’s ranking will move into the top 20.