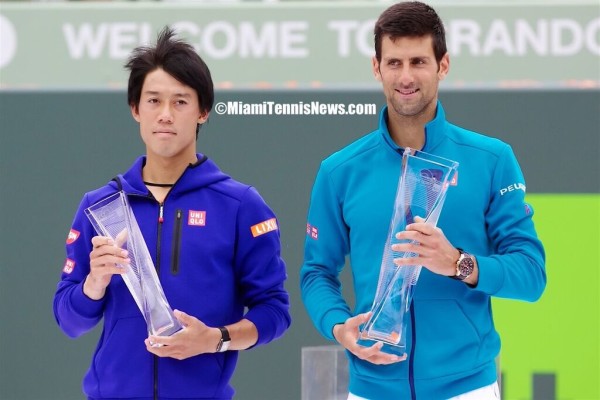 (April 3, 2016) Novak Djokovic won his third straight Miami Open title on Sunday over No. 6 Kei Nishikori 6-3, 6-3 to make himself both the all-time leader in Masters Series titles with 28 and the leader in career prize money with over 98 million dollars.

This is his sixth career Miami Open title and the world No. 1 has now completed the Indian Wells – Miami double in the same year for a fourth time, three years in a row.

The Serb has tied Andre Agassi for the most Miami Open tournaments won.

“I don’t know for other players, but it’s tough to find his weakness,” Nishikori said. I had a couple of strategies before this match, but I don’t think I did well enough to beat him today. I was missing a lot with my forehand and made too many unforced errors.

“He has great defense, so it’s tough to break his game. He was very patient and he didn’t miss. It’s always tough to play Novak.”

With the future of the Miami Open in doubt due to court battles in regard to be able to upgrade its facility, there is a possibility of relocation. Djokovic said: “I don’t know how much you follow the stories about the tournament moving,” he said during the trophy presentation. “I assure you it’s going to stay here for a long time. So see you next year.”

“From some reliable sources I know the tournament will stay here for many years to come,” he said laer during his news conference. “I don’t think we need to have a conversation about moving this tournament anywhere else.”

“Every year that I come back to Miami I do go through those memories from back in 2007,” Djokovic said. “It was the first Masters 1000 I won and opened a lot of doors for me. It gave me a lot of self-belief. I started to realize that I’m able to win the big trophies and to beat the best players in the world.

“So of course this is a [special] place for me to come back to, now winning it six times. Obviously I don’t take any win for granted and especially in the big ones. So it was my best performance of the tournament. It came at the right time against a great quality player.”
Djokovic is now 28-1 on the year, his only loss coming in Dubai when he had to retire from a match with an eye infection.

Djokovic also passed coach Boris Becker for sole possession of 11th place in the Open Era in match wins with his 714th.
Djokovic heads home to Europe to begin the clay court season.

“I have lots of motivation for the beginning of the clay court season that ends up hopefully with the crown in Paris,” he said. “But I’m not the only one who wants to win that big trophy.”

The French Open is the lone major Djokovic has never won.