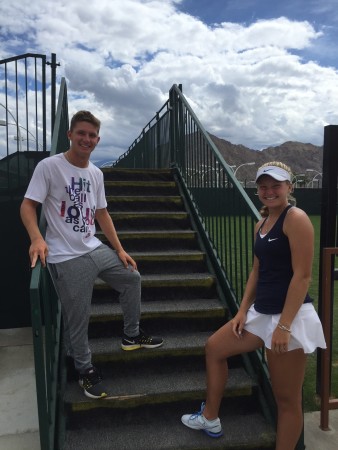 In the Boys’ ITF final, the unseeded Ross beat his former doubles partner and friend John McNally, the No. 4-seed, from Cincinnati, 6-4, 7-6 (3). Ross, whose family moved to Florida in September, joins recent boys’ champions Gage Brymer (2013), Marcos Giron (2011) and Bjorn Fratangelo (2010) to win the title as an unseeded player.

In the Girls’ ITF singles final, the No. 8-seeded Sanford took out No. 13 Ellie Douglas of McKinney, Texas, 6-4, 1-6, 6-1. All four players were awarded $750 travel voucher checks by tournament director Lornie Kuhle, who has pioneered the idea with approval from the ITF to pay the players and helping to defray the high cost it takes to travel to junior tournaments like the ASICS Easter Bowl, held for the third consecutive year at the Indian Wells Tennis Garden, site of the BNP Paribas Open.

In winning his first ITF singles title, Ross, 17, didn’t show tons of emotion and was humble in accepting the first-place trophy. After taking the first set against McNally, he fell down a break at 5-4 and McNally serving for a set point. But Ross got “lucky” on a drop shot at his feet and then took advantage of a net cord eventually converting the break to swing it to 5-all and the momentum back on his side. On break point, he hit a backhand down the line for a winner. “I was fortunate in that game,” he said. “I had a lucky game.”

McNally, 17, admitted he didn’t serve well, and if he would have converted on the second-set set point, that he would have won the match. “I thought I was going to win today, but that’s how it goes.”

McNally held a 2-0 lead in the tiebreaker but hit several unforced errors to go down 2-5. “And you can’t do that against a player like him,” McNally said.

Ross joined recent former USTA Midwest Section players Chase Buchanan (2008) and Evan King (2009) on the champions list. He said he hopes he can remember this special victory, “Whenever I have any bad moments.”

McNally said he will get ready for the Europe junior Grand Slams and that his junior tournaments are numbered. “I’m looking forward to a really fun summer and hope I can tear it up.”

Sanford, who won the Torey Fretz / Jackie Cooper Sportsmanship Award along with yet another USTA Midwest player, J.J. Wolf of Cincinnati, on Saturday, said accepting that award didn’t stop her from some audible “Come Ons” during the match.

Like Ross, Sanford was not very demonstrative in her actions immediately after the win. “It was more on the inside,” she said. “I felt a lot of emotion out there on the court today, and when I put away that backhand (on the final point), it was just kind of a relief. I was so happy on the inside, but I just didn’t show it.

“To be able to win the Easter Bowl, I’m pretty excited.”

Sanford, 17, thanked her mother and her USTA coach Henner Nehles, who was on hand all week and who she has worked with since the beginning of the year.

She said she lost some focus after winning the tight first set. “I may have relaxed a little bit,” she said. “In the second set I got too comfortable.”

The 15-year-old Douglas said she was hurt by some “dumb errors that cost her early in the third set. “I feel like I had several chances and many, many game points I didn’t convert on,” she said. “My serve was really off today. I just need to go home and get some rest and then practice some more. That’s how tennis goes.”

Douglas added: “I think I played too short and she served out wide very well and it was very consistent. I wish I would have played a little bit better today.”

Playing for the first time as a team, Nathan Ponwith and Jake Van Emburgh topped the unseeded team of Vasil Kirkov and Sebastian Korda, 2-6, 7-5, 12-10. Ponwith, who also won the Carson ISC doubles title last week with Will Blumberg, and Van Emburgh battled back saving match points in the second set down 4-5. The pair led the super tiebreaker 9-6 and then again at 11-10, finally converting on the fifth match point to win the ITF doubles title.

In the another thrilling doubles final on the girls’ side, the unseeded team of Elysia Bolton and Chiara Lommer took out the No. 6-seeded team of Victoria Emma and Sofia Sewing, 4-6, 6-2, 10-8.