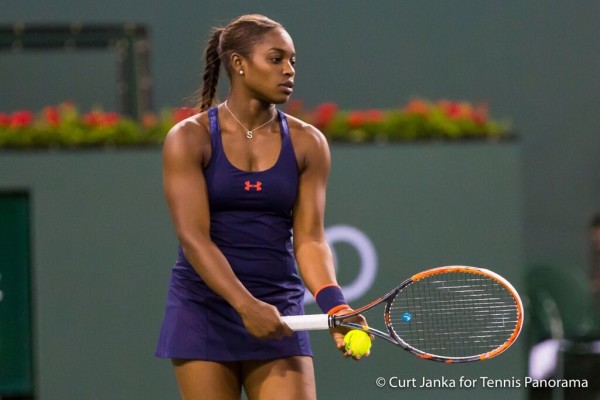 (April 10, 2016) Seventh seed Sloane Stephens captured her third tournament title of the year on the WTA tour, defeating qualifier Elena Vesnina 7-6(4), 6-2 to win the Volvo Car Open in Charleston. Before this past week, the 23-year-old American only won one match on Charleston’s green clay during the five times she played in the main draw.

Stephens moved out to a 5-2 lead in the first set, when the 29-year-old Russian won the the next four straight games to serve for the set at 6-5. Stephens broke back, saving a set point in the process, and took the tiebreak from the 2011 Charleston finalist.

“Obviously coming into here I have a lot of anxiety coming into this tournament because I’ve never done well here,” Stephens said. “I just thought, you know, I’m just going to go have fun. I have nothing to lose. I’ve only won one match here ever, and just go out and play and have fun because I mean it’s just another week, and after this I’ll have a nice little break. I’m going to go to Europe.

“I don’t have anything to lose. My life is great. It’s tennis. And this is what I do every week. So I kind of just changed my mindset, and that worked. So I should just do that every week.”

“All the way from the qualies. I can’t believe I’m standing here in the finals,” Vesnina said during the trophy ceremony. “I love Charleston.”

Stephens now adds Charleston to her Acapulco and Auckland titles from earlier in the year. She now has four career titles.

Only Stephens and Victoria Azarenka have won three tittles so far this year on the WTA tour.