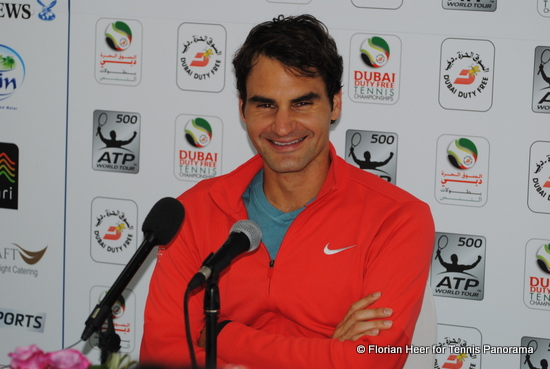 (April 12, 2016) Roger Federer made his return to the court on Tuesday at the Monte-Carlo Masters with a 6-3, 6-4 second round victory over Guillermo Garcia-Lopez. Federer had been off the tour since reaching the semifinals at the Australian Open due to arthroscopic surgery on his left knee on February 3. He was to have played at the Miami Open, but withdrew from the event prior to his first match due to a stomach virus.

“The knee felt really good, like in practice,” Federer said to media. “Felt like I didn’t have to worry about it. I could just go freely. I think I’m at a point now where, you know, I’m looking more forward in the sense that whenever I can dig out a good point, I did good movement, I just kind of went for the dropshot without having second thoughts. It’s only building on my confidence now, which is great.

“It’s been like that for at least, I’d say, over a week now. Yeah, I was very pleased how I felt, even how I played. I mean, he did kind of go for his shots, but we had longer rallies in the beginning of the first set.

“I think in a way it was a perfect match. It was close in the beginning, then I was able to go on a roll. Points were cut short by virtue of me serving better and returning better, getting second serves, taking advantage of that fact.

“At the end, again, I had to fight for it. I went through different phases in the match. Also emotionally. I was excited and tense in the beginning just because it’s a first round. It’s my first match back. So it was nice to go through all these emotions.

“At the end he’s a guy that knows how to close out, knows how to play points on clay. It was a great win for me. I said beforehand, it was always going to be a winning result today, regardless of winning or losing essentially. I’m just very happy I’m back on the tour again.

“I think I got what I needed. So we’ll see how I feel tomorrow, tonight, the next day. Sometimes after a match, you can feel it for two days. At this point I’m pretty confident I’ll feel fine.”

The 17-time major champion was asked if he was afraid during the process of having surgery and not being 100% on the court, he said: “For me, the toughest moment was the two hours after waking up. I couldn’t feel my knee, my leg. I could hardly move my toes. It was hurting a little. This is when I was a bit afraid about the future. Suddenly I thought that I needed to really go for it if I wanted to be a professional tennis player. I was wondering.

“But then my father came to visit me in the hospital. Mirka was there, too. The first evening things were already better. We were joking again with my doctor. It was good to see everybody there.

“The next day or two days later I had a meeting with the whole team to talk about our plan, our schedule, how we were going to do the rehabilitation process, what tournament I could start playing again. From there, it became a lot more pleasant because I was able to be much more positive mentally. I knew we had a plan.

“Once you have a plan, it’s better. You have to wait until the surgery is over to know how the surgery went. Then it was good talking with the doctor who told me what I could expect for the next 10 days, the next three weeks, et cetera. So there was a slight possibility of me playing Miami.

It’s always good to have a goal. So the goal was Miami. In the end, I was very satisfied to say I was ready to play for that tournament, but unfortunately the virus stopped me from doing that.”

World No. 2 Andy Murray had a few serving hiccups in his win over Pierre-Hugues Herbert 6-2, 4-6, 6-3 in his second-round match in Monte-Carlo.

“I’ve definitely been a little bit flat since the Davis Cup really,” said the Scot. “I don’t know exactly why that’s been the case. But in a lot of my matches, it’s been that way, you know, some good stuff mixed in with some pretty bad stuff.

“The norm is bad just now, so I need to kind of improve on that. You know, even when I’m not playing my best, play more solid, make it more difficult for my opponents.

“When I’ve been playing well, I’m actually hitting the ball very clean. But just the consistency has not been there, maybe not as sharp as I could be mentally. Concentration’s not been so good.”