You are here: Home / Features / Murray to Face Nadal in Monte-Carlo Semis; Federer Falls to Tsonga 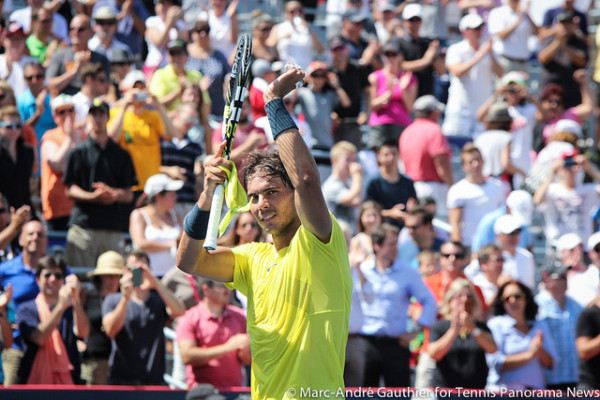 (April 15, 2016) Andy Murray and Rafael Nadal posted decisive victories and will play each other in the semifinals of the Monte-Carlo Masters on Saturday. Roger Federer returning to the court for the first time since his knee surgery in February fell to Jo-Wilfred Tsonga. Tsonga will play fellow Frenchman Gael Monfils in the other semifinal.

“If I play like I did today, I’ll have a chance,” said Murray.

“Rafa, especially on this court, he plays great on clay obviously, but on this one in particular, his record is incredible. I think he’s maybe only lost one or two matches in his life here. So, yeah, it’s a great test for me this early on in the clay season.

“I’ll go into the match with confidence having managed to win against him in Madrid on the clay last year, and having played a really good match today.

“I’ll have to play a great match, but also a smart match as well,” Murray explained. “I need to be intelligent on the court, go in with a very good idea of what I want to do in the points.

“So, yeah, that’s the most important thing, to have a good game plan and be smart on the court. Against Rafa on this surface, he has the ability to get you to sort of play – I don’t know what the word is – but he gets you to go for more than you should because he’s so consistent.

“He hits a lot of height on the ball, a lot of spin. He can make you go for winners from uncomfortable positions. You have to not allow that to happen. You need to try and stay calm, be patient. I’ll try to do that.”

Nadal broke Wawrinka’s serve four times to reach his 11th Monte-Carlo semifinal. The Swiss broke his racquet in the fifth game of the first set to the boos of spectators. Wawrinka said he was disturbed by all of the noise coming from the restaurant above the court.

“You wonder whether people are coming to have lunch or to watch tennis. I don’t believe they saw a lot of the match. I think they also drank a lot of alcohol.” Wawrinka said. “When you don’t play well and you’re not in your match, it can bother you.”

“Anyway, it was not a good day for me today,” Wawrinka said. “I really need to work on two or three things that I want to improve. I have two weeks, or a bit more, before I go to Madrid. I will try to prepare well during that period.”

“I believe today it was more of a concentration issue or mentally that I had a problem. I struggled. I rushed at the beginning. This is something you pay for against Rafa.”

“The real thing is every day is a different story,” Nadal said. “Yesterday I played against an opponent that he was playing so good, in my opinion. Is true that my serve probably was a little bit better today than yesterday. But both days I think I played good, no?

“Stan today, I think the last three games of the first set, that’s the only moment that he didn’t play well. Obviously he played with too many mistakes.

“But in the beginning of the match and in the second set was a good match, in my opinion. Both played good points.

“I think he played with more mistakes than me. But is true at same time he is going more for the shots all the time. When you want to play this way, very aggressive, you can have mistakes.

“I think I played good. I defended well. I moved well. When I had the opportunity, I was trying to have the control of the point with my forehand and with my backhand, too.”

Nadal plays Murray for a place in the final. The Spaniard has a 16-6 record against the Scot.

“He played a great match today,” Nadal said. “We’ll see. I need to be ready to play the way I am playing the last two matches. If I am able to do it, I hope to have my chances.

“He always was a good clay court player, no? He played semifinals of French Open twice or three times, I don’t know.”

Federer was two points away from defeating Tsonga at 6-3, 2-6, 5-4 with the Frenchman serving, but could not close.

“Yeah, I mean, I think it had definitely some twists and turns,” said Federer. “I’m not sure how come. Maybe we were both a bit up and down. We had a couple of games here and there that we kind of gave each other on the serve. Kind of hung onto it, me in the first, him in the second.

“Third was close all the way through. Maybe had a small chance the first game maybe. The game I got broken is a tough game to get broken on because I think I had three forehands that I’m in good position, and I end up losing all three points. It’ll a tough break to get.

“You know, it was a good tournament, a good match, exactly what I was hoping for and more, so I’m very happy.”

“It was a good match. It was nice to play an intense match. I’m happy how the body reacted. So many good things this week. It’s all positive for me.

“I know where I’m at now. I hope my knee and my body is going to be okay the next couple of days. If I’m good, I might go practice tomorrow as well just to get the body into maybe a rhythm of playing maybe four days straight at a very intense level. If I feel like I need a break, the team tells me to rest, I’ll do that tomorrow.

“Things are really good right now. Of course, it was unfortunate because I had my chances. But this tournament, really doesn’t matter at all if I missed or not those chances.”

“I was expecting a difficult match, and that is exactly what happened. He was very reactive, he was running well. From the start, I thought he was very fast.

“But I was able to turn it around. He dropped his level a little bit and I was able to come back into the match and end up winning. It’s good for me.”

As for playing fellow Frenchman and friend Gael Monfils next: “You feel a bit more worried against him. Before, he had his own way. Now, he changed. But it’s still him.

“He’s certainly improved in a number of things, but it’s still him. I don’t really know what to expect. I’ll go on the court doing what I’m used to doing: trying to be aggressive, serving well. Gael is just the way he is. He is him. It’s good.”

“There’s not a real favorite (in the match), “ Tsonga said. “It’s going to be an interesting match. It’s difficult to say who will be the favorite.”

“It’s going to be a big match for several reasons,” Monfils said. “First, Jo has a game that I have trouble with. I was able to beat him once, but he was coming back from an injury.

“Another time I beat him, too. He was injured in Montpellier. I can’t say I really beat him.

“Tomorrow the match will be different. I will need to find a solution to push him back and to try to stop him dominating the rallies.

“So if I have a slight advantage in this match, it’s because I know what he’s going to do. He’s going to play aggressively. I don’t believe I’m wrong.”

“I think it’s going to be explosive.”