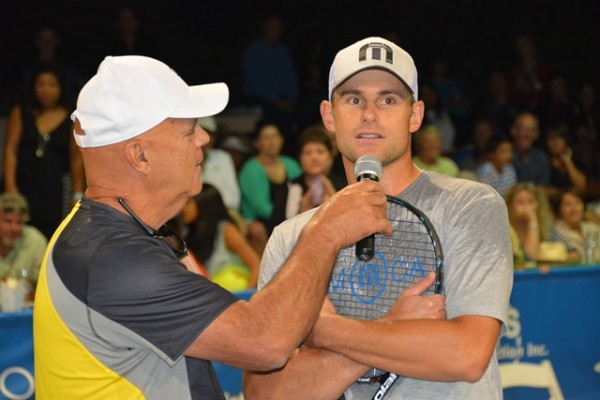 (April 14, 2016) Andy Roddick defeated John McEnroe 6-3 in the one-set final of the Champions Classic St. Louis Thursday at the Chaifetz Arena in St. Louis, the third event on the 2016 PowerShares Series tennis circuit.

“St. Louis is a great stop for us,” said Roddick after his victory. “This has always been a great tennis town.”

The win was Roddick’s 12th career title on the PowerShares Series, the North American tennis circuit for champion tennis players over the age of 30. Roddick, 33, has won 12 of 15 career PowerShares Series events since he ended his ATP World Tour career at the 2012 U.S. Open. He dominated the PowerShares Series in 2015, winning a single-season record eight titles. In his debut year on the Series in 2014, he won two of the three tournaments he played. Last Saturday in Charleston, S.C., Roddick won his debut event of the 2016 season with a 6-1 final-round win over Andre Agassi.

Earlier Thursday night, Roddick beat in his former Davis Cup teammate James Blake 6-2 to advance to the final. McEnroe defeated Jim Courier 7-6 (5) in the other semifinal.

“It’s always a pleasure to play James and Johnny Mac is still playing well,” said Roddick. “It’s a blast for me to play these events.”

Each PowerShares Series event features two one-set semifinal matches and a one-set championship match and, for the second straight year, players make their own line calls with assistance of electronic line-calling.

The remaining 2016 PowerShares Series schedule with player fields are listed below and ticket, schedule and player information can be found at www.PowerSharesSeries.com;

In 2015, Andy Roddick won the PowerShares Series points title in his second year of competing on the series with 1,600 points. Roddick won a record eight events Los Angeles, Lincoln, Chicago, Austin, Little Rock, Dallas, Richmond and Minneapolis. Blake finished second in the points rankings with 1,200 points, winning events in Boston and Cincinnati. Mark Philippoussis finished in third with 1,100 points, winning titles in Salt Lake City and Vancouver. The year before in 2014, McEnroe won the points title for the first time in the nine-year history of Champions Series tennis by winning events in Kansas City, Indianapolis, Nashville and Charlotte.