(May 8, 2016) Novak Djokovic won his second Madrid Open title on Sunday beating Andy Murray 6-2, 3-6, 6-3 for a record 29th Masters title and 64th career ATP World Tour title. The world No. 1 is now tied with Pete Sampras and Bjorn Borg for sixth place for titles won in the Open Era.

This win raises the Serb’s record against the Brit to 23-9, victorious in 12 of the last 13 matches.

“This came at the right time,” Djokovic said. “I had an amazing opening four months of the season. Then an early exit in Monte-Carlo, but it happened for a reason, because I needed some time to really recharge my batteries. Three weeks was more than enough to get some freshness and new breath and get ready for Madrid. I came here early, got used to the conditions, and played a really fantastic tournament that will definitely serve as a great confidence boost before Rome and the French Open.”

“I started very well,” Djokovic explained. “Played terrific tennis in the first set. Couple of close games in the second, beginning of the second set, and then I made some unforced errors and double faults in the game when I dropped my serve in the second set. I couldn’t get back.

“He started serving very well, especially down the T and deuce side. Very precise and very strong, and he was backing that serve up with aggressive first shots, and then just about an hour it was split sets.

“Then the match really could have gone either way, but we exchanged some breaks of serves early in the third. Then when it seemed like I was closing out the match and having a match point at 5-2, he came up with some big serves again. The last game obviously got myself out of some trouble with some good serves, with some good forehands, but was very, very close. Very close.” 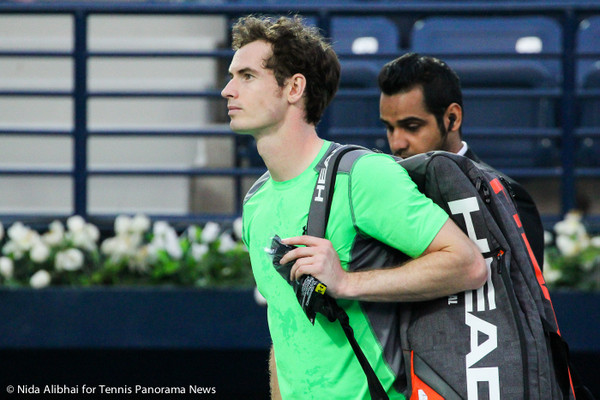 “I obviously fought hard today,” Murray said. “Yeah, disappointed because from like two games, like 2-All to 4-2, 5-2, I was making him work hard in the second set and then beginning of the third and then at the end of the third set.

“I just think I’m definitely moving better. That’s for sure. It makes a huge difference. Like I said, on the other surfaces it’s a massive strength of mine, a big part of my game, and for a number years I didn’t move well on the clay. It was a hindrance, and that makes you uncomfortable. If you took Ivo Karlovic’s serve away he would feel uncomfortable going on the court. For me, take my movement away.

“When I was having the problems with my back it was difficult for me when stepping on the court; whereas now my body feels great. I feel like I’m moving a lot better. So I’m not going on the court sort of a little bit nervous or apprehensive. I believe I can play well on clay now.

“There was a period there – if you watch it back – the game I got broken [in the third set], I made three unforced errors in that game. That was disappointing. Then obviously the last game I don’t know how many break point chances I had, but must have been six or seven.

“Both of us were pretty clinical on the break points up until the last game for me. That’s why he’s No. 1 just now. He fought very hard in that game and served well when he was a bit nervous. At the end he came up with some big serves and got himself some free points and did well.”

“Then the match really could have gone either way, but we exchanged some breaks of serves early in the third,” noted the world No. 1. “Then when it seemed like I was closing out the match and having a match point at 5-2, he came up with some big serves again. The last game obviously got myself out of some trouble with some good serves, with some good forehands, but was very, very close. Very close.”

Since Murray did not defend his Madrid title from last year, he will slip to No. 3 in the world on Monday. Roger Federer will move up to No. 2.

In the men’s doubles final Jean-Julien Rojer and Horia Tecau won their first Masters 1000 title as a team, beating defending champions Rohan Bopanna and Florin Mergea 6-4, 7-6(5). It was their 12th trophy overall.

“They are a great team, and also friends,” Rojer said. “It’s never easy to play these matches and it’s difficult for all four guys.”

“I want to thank my partner for having another great week,” said Tecau. “We were struggling for a few weeks, couldn’t win a lot of matches… It feels great to play well together and get another title.

“We’ve been chasing this one for almost three years. We’re really excited to get this one because it comes after having a few early exits in Masters 1000 events this year. So it means a lot to us.”