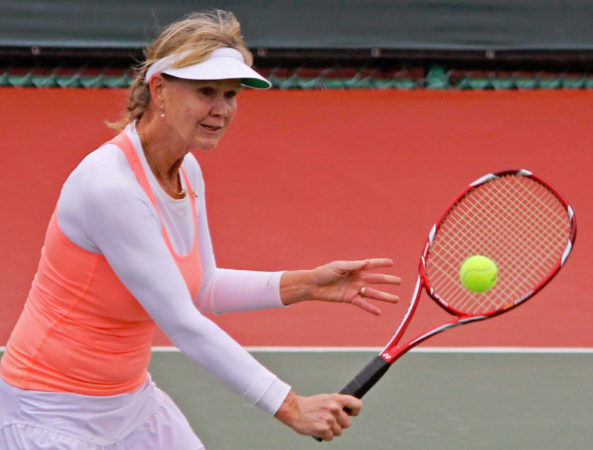 La Jolla, Calif. – (May 10, 2016) – When Ros Nideffer competed on the women’s professional tennis tour, she played at the highest level, achieving a career-high No. 15 in the Women’s Tennis Association singles rankings in 1990 and twice reaching the singles quarterfinals at Wimbledon.

This week, the 55-year-old Nideffer, who lives in the San Diego community of Rancho Bernardo, is playing in the USTA National Women’s 50-90 Hard Court Championships at the La Jolla Beach & Tennis Club and is attempting to win the 50s singles title for the third consecutive year and fourth-time overall.

On a cool and overcast Tuesday morning, Nideffer, who won her first 50s title in 2012, advanced to the quarterfinals with a convincing 6-0, 6-0 second-round victory over unseeded Nancy Abler-Sanchez of San Diego. The two-time defending champion will face sixth-seeded Kristin Fudalla of Portland, Ore. on Wednesday at 10 a.m.

Nideffer, who did not play the event in 2013, credits her experience on the women’s professional tour and an all-court game for her success in the 50s National Hard Court Championships. “I’m strong and I’m fast compared to other people my age,” Nideffer said. “I can stay back and I can come in. I have a variety of shots to draw from and I can mix it up. I’m just excited to play. I’m just challenging myself.”

If Nideffer advances to the 50s singles final, she could face second-seeded Nathalie Herreman-Bagby, a former touring tennis professional, who was ranked as high as No. 42 in the WTA singles rankings in 1986. She reached the fourth round at Wimbledon in 1990.

Full draws for each division are available at:
http://tennislink.usta.com/Tournaments/TournamentHome/Tournament.aspx?T=170897

The La Jolla Beach & Tennis Club’s 44th Annual Men’s Senior Championships is also taking place in conjunction with the women’s events, and include both singles and doubles for 60 and over, 65 and over, 70 and over, 75 and over, and 80 and over age groups. Although the men’s events are not national championships, they will feature many senior players who regularly compete in national tournaments. Total participation for both the men’s and women’s tournaments is expected to be 300-plus players.

Live audio play-by-play of tournament action on Saturday, May14 and Sunday, May 15 will be available on RadioTennis.com. Tennis broadcaster Ken Thomas will provide the web cast commentary.