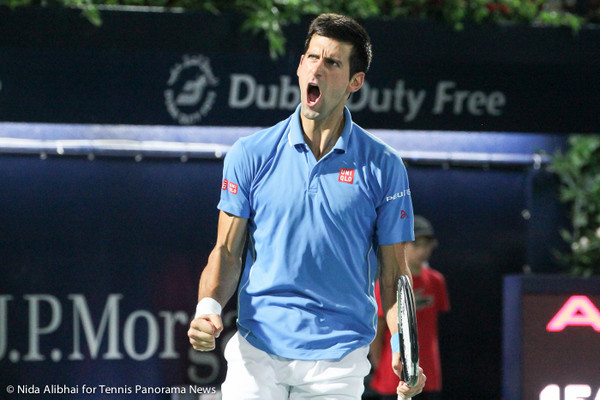 (May 13, 2016) Novak Djokovic came back from a break down in both sets and set points down in the second set to fight off Rafael Nadal 7-5, 7-6(4) to reach the semifinals of the Italian Open on Friday in Rome. The dramatic match lasted almost two-and-a-half hours. The world No. 1 has now beaten the 14-time major champion seven straight times and has raised his record to 26-23 over the current No. 5. The Serb has now won 15 straight sets against the Spaniard.

Nadal grabbed opening breaks of serve in both sets and had five set points in the second set  serving at 5-4, but Djokovic kept coming back from adversity.

“I held my nerve at the clutch moments,” Djokovic said in an interview after the match. “Even though I had nervy beginnings to both sets, with some good games and good play in the crucial moments, I managed to win. It’s a straight-sets win, but it feels like we played five sets.

“Winning against Nadal is the ultimate challenge on clay courts and one of the toughest challenges we have in sport. I have to be very pleased with the way I handled myself in the big moments today. I won against one of my biggest rivals on his preferred surface. We must not forget he’s in form. He won Monte-Carlo and Barcelona and has played well the past couple of weeks. That gives me confidence for the rest of this tournament.”

Djokovic said that it was special to be on court playing against Nadal.

Nadal said that he was not disappointed and felt that he played well against the best player.

Djokovic will face-off against Kei Nishikori in his semifinal on Saturday. The sixth seed Nishikori beat 13th seed Dominic Thiem 6-3, 7-5.

No. 2 seed Andy Murray moved into the final four with a 6-1, 7-5 win over David Goffin. Murray will play French lucky loser Lucas Pouille for s spot in the final on Saturday. Pouille advanced when Juan Monaco withdrew with a left hip injury.

On the women’s side, No. 1 ranked Serena Williams, getting a little revenge from her loss in Miami, when she demolished Svetlana Kuznetsova 6-2, 6-0 in 51 minutes. She’ll play Irina-Camelia Begu next who beat Misaki Doi 6-2, 7-6 (3).