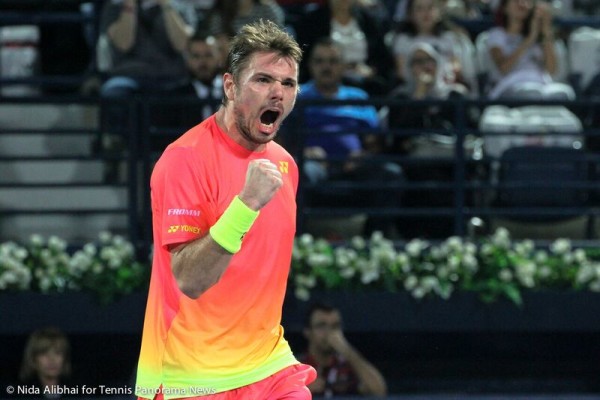 (May 22, 2016) Defending French Open champion Stan Wawrinka comes into the second major of the year by winning the Geneva Open beating Marin Cilic 6-4, 7-6(11) in the final. This is the Swiss’ 14th career title.

The Geneva title also gives Wawrinka his first career crown in Switzerland. Wawrinka had played for the singles title in Gstaad in 2005 and for the doubles title there in 2004 and 2008 but lost all three times.
“It’s a dream come true to be able to win a title in Switzerland, after all these tournaments and winning Davis Cup, said the world No. 4 and third seed at Roland Garros. “To be able to do it here in Geneva, in the event’s second year is something special. The fans were great. They made a lot of noise today.

“Marin is a great player. Of course he’s had some injury problems of late but he’s the type of player who can always step up against the best in the world. He really ramped up the pressure toward the end, with those set points, so it was nice to be able to finish off the match.”

Kiki Bertens, a qualifier beat Mariana Duque-Marino 6-2, 6-2 to win the Nuremberg tournament on Saturday. Bertens knocked out the top seed, Roberta Vinci in the second round of the German

Caroline Garcia made her country happy on Saturday beating veteran Mirjana Lucic-Baroni of Croatia 6-4, 6-1 to win the Strasbourg International for the second title of her career.

Lucic-Baroni played the final of this event 19 years ago against Steffi Graf.

In a battle between up-and-comers on the ATP tour, top seed Dominic Thiem of Austria beat German 19-year-old Alexander Zverev 6-4, 3-6, 6-0 to defend the Nice Open title for his third ATP trophy of the year.

This is Thiem’s 6th career title.

“It’s been an unbelievably great week,” Thiem said. “The first time I had to defend a title and I made it. Maybe I played better in the three matches before this, but a final is always special. You have so much to win and so much to lose. I played a solid third set and I’m really happy. My arm is a little tired, but I will be ok for Roland Garros on Monday.”

The French Open begins on Sunday.