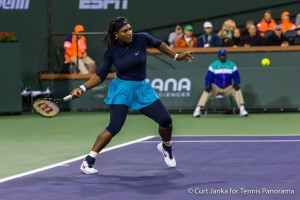 (May 24, 2016) Top seeds Serena Williams and Novak Djokovic had easy opening victories at Roland Garros on Tuesday. Williams, the defending champion going for her fourth Paris title destroyed No. 77 Magdalena Rybarikova 6-2, 6-0 in 42 minutes. The 21-time major champion hit 25 winners and made only five unforced errrors.

Djokovic is seeking to win his first French Open title to complete a career Grand Slam. The Serb defeated No. 95 Yen-hsun Lu of Taiwan 6-4, 6-1, 6-1. Also reaching the second round easily was nine-time champion Rafael Nadal who blasted past Sam Groth 6-1, 6-1, 6-1.

“It’s unbelievable what he’s doing,” said Murray in an on-court interview. “He had an extremely bad injury last year and was our for eight or nine months. At 37 years old and coming out and fighting like that, playing that way, is unbelievable. I don’t expect to be doing that myself at that age! I’m just glad I managed to get through.”
Australian Open champion and third seed Angelique Kerber was the biggest upset on the day. The German suffering from a left shoulder injury lost to No. 58 Kiki Bertens of the Netherlands. 6-2, 3-6, 6-3. Bertens is fresh off winning a title over the weekend in Nürnberg, where she was a qualifier.

2010 French Open champion, unseeded Francesca Schiavone lost to Kristina Mladenovic 6-2, 6-4. It was announced on court that Schiavone was retiring, but she set the record straight during her news conference.

“Roland Garros announced my retirement but I didn’t.”

“So you can stand up all of you and go back to work in the office because I didn’t say that. I will announce when I will want to stop.”