You are here: Home / Features / Andy Murray Survives in Five to Reach French Open Third Round 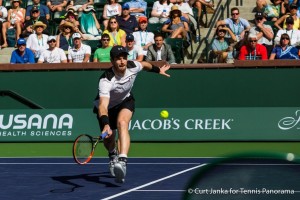 (May 25, 2016) It was déjà vu all over again for No. 2 Andy Murray surviving another five-set match to win 6-2, 2-6, 4-6, 6-2, 6-3 in three hours and 34 minutes over Mathias Bourgue on Wednesday to reach the third round of Roland Garros.  The wild card Frenchman Bourgue, playing just his second tour-level match of his career, actually requested a can of coke and a Mars candy bar on center court – Court Philippe Chatrier to gain some energy. He did get the drink but received a Twix bar instead.
Murray said that he lost his way during the match, said that he needs to go and rest having been on the court for more than seven hours in his two matches over 10 sets.

The 22-year-old Frenchman had tremendous support on court. “Thanks to all the crowd for encouraging me the whole match,” Bourgue said after the match. “It was really an emotional moment for me, and I will never forget it.”

“Physically, the average rally length will only be a few shots – maybe three, four shots max. So that’s a positive there,” Murray said to media. “At least I get a day’s rest now. But you can’t continue playing matches like that and then expect to win the tournament.”

On both the men’s and women’s side of the tournament almost all of the seeds advanced, the lone exceptions – on the women’s side was 27th seed Ekaterina Makarova and on the men’s side 29th seed Lucas Pouille.