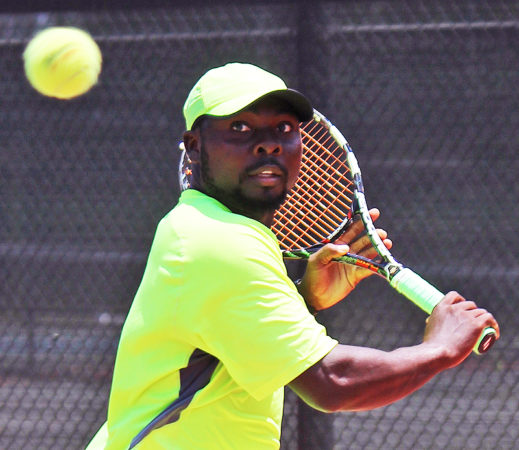 Mensah matched the hard-serving Menichella, who plays collegiate tennis for Pepperdine University, game for game in a spectacular start to the opening set. After holding serve in the 11th game to take a 6-5 lead, Mensah hit a winning backhand service return on double break point to break Menichella’s powerful serve and secure the first set.

In the second set, Mensah took command, winning six of the next seven games, as he varied the pace of his game and hit low shots to keep the 6-foot-5-inch Menichella off-balance. Mensah, a former Davis Cup player in his native country of Ghana, went on to close out the match in one-hour and 50 minutes.

“I would like to congratulate Stefan. He played an amazing match today. I got lucky on some of the crucial points. He likes to hit big, he’s a big guy. I tried to keep the balls low and bring him in because I know he’s very solid at the baseline. Everything worked well for me,” Mensah said.

“Defending the title makes me feel good. Winning the title the first time was a very happy moment in my life, the second time, it’s double happiness,” Mensah added. “It’s an honor to win this tournament. A lot of good players have won it, so I’m proud to be among them.”

Top-seeded Jessica Failla captured the women’s singles title as the 18-year-old from Ramona, Calif., dominated second-seeded Salma Ewing of Long Beach, Calif., 6-0, 6-2 in the final, which took one-hour and 25 minutes to complete.

“It feels amazing. It’s a great feeling. I love this tournament so much,” Failla said. “I haven’t been able to play it the last couple of years, but I’m so glad I was able to be here in my hometown and at Balboa, it’s so beautiful.”

Failla was asked about having to face Ewing, a talented 15-year-old junior player, in the title match. “She’s the type of player you have to stay on because she has a really good game. She hits really hard and is always looking to come in. I just tried to do my best and play every single point to the best of my ability,” Failla said.

The winners of each division of the USTA National Open Hard Court Championships were awarded a USTA gold ball, while the runner-up received a USTA silver ball. A 3rd/4th place playoff took place for the USTA bronze ball. Prize money was distributed to both finalists as well as third and fourth place finishers in each division.