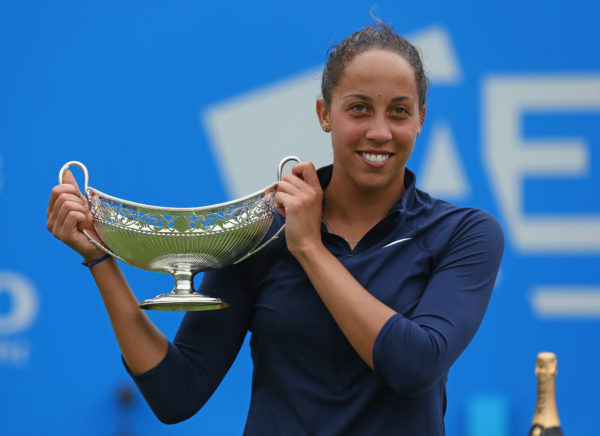 BIRMINGHAM, ENGLAND – JUNE 19: Madison Keys of United States celebrates with the Maud Watson trophy after her victory in the Women’s Singles Final on day seven of the WTA Aegon Classic at Edgbaston Priory Club on June 19, 2016 in Birmingham, England. (Photo by Steve Bardens/Getty Images for LTA) Used by permission Getty/LTA

(June 19, 2016) American Madison Keys is the new Aegon Classic Birmingham singles champion after an emphatic 63 64 victory over Barbora Strycova at the Edgbaston Priory Club on Sunday.

Victory at the WTA Premier event marked a second grasscourt title on British soil for Keys, who also won the Aegon International Eastbourne in 2014. She was also a quarter-finalist at Wimbledon last year and will go into this year’s Championships as contender after an impressive week in Birmingham.

“I’m feeling pretty good,” said 21-year-old Keys, ranked 16 and seeded seventh in Birmingham. “I think getting this many matches in a row was a huge opportunity that I think that can definitely help me at Wimbledon.

It definitely gives me some confidence and I would love to follow this one up with that. It feels good knowing that a lot of people who have done well here have done well at Wimbledon.”

Strycova had some consolation when she and Karolina Pliskova won the doubles title with a 63 76(1) win over Alla Kudryayseva and Vania King. The doubles final had to be moved indoors mid-match when rain returned at the end of the first set.

“She was too good today,” said Stycova of Keys’ performance in the singles final. “Of course, losing the final is always disappointing. But I played good couple matches and I beat good players on grass.”

Both players paid tribute to the Edgbaston Priory Club grounds team and the immaculate grass courts that they produced for the tournament. Keys took time after the final to thank them in person and pose for a photo with Head of Grounds David Lawrence and his team.

“The groundsmen were amazing. The fact that the court held up as well as it did, considering how much rain we got, just shows how amazing they were and how much hard work they put into this week. They were a huge part of this week.”