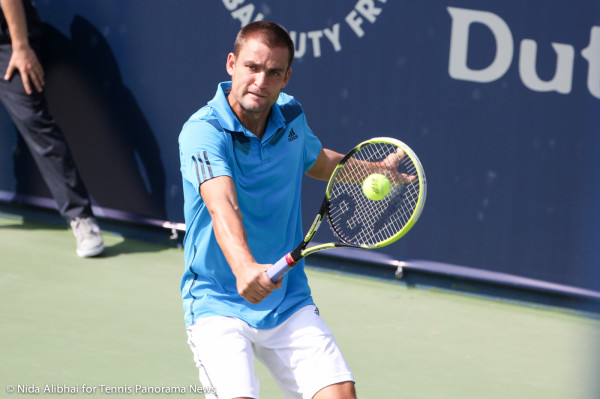 (June 20, 2016) Fresh off a Stuttgart quarterfinal, former Top 10 player, Russia’s Mikhail Youzhny won just his fifth first round match this season beating Teymuraz Gabashvili of Ukraine 4-6, 6-3, 6-3 in the opening round of Nottingham on Monday.

The Russian, who last won an ATP title back in 2013, has bounced back into the top 100 playing Challenger events to raise his ranking.

Great Britain’s Kyle Edmund and Dan Evans will be looking to reach the third round of the Aegon Open Nottingham on a jam-packed Tuesday, with all 17 singles matches and four doubles ties scheduled to go ahead at the Nottingham Tennis Centre.

British No. 3 Edmund, who reached a career-high ranking of 68 after his quarterfinal run at the Aegon Championships at the Queen’s Club last week, will face Ukrainian fourth seed and last year’s Aegon Open semi-finalist Alexandr Dolgopolov, while British No. 4 Evans will be up third on Centre Court against Lithuanian Ricardas Berankis.

After his 6-4, 6-3 win over Czech Lukas Rosol on a rain-interrupted Monday, Edmund said: “He’s a very dangerous player – you don’t know what to expect with him. I played him earlier this year on clay so I knew what his game style was, but grass is very different.

“It was a solid match, I came off feeling very good about my game and how I managed the match.”

Ahead of his match against Dolgopolov, the 21-year-old added: “It will be a tough match. I lost to him in the first round last year at Wimbledon. He’s a very tricky player, not someone who you play regularly in terms of his shot-making. He mixes it up well, slices it a lot, awkward slices.”

Elsewhere top seed Kevin Anderson will begin his campaign against Croat Ivan Dodig, while Spanish veteran Fernando Verdasco will take on Victor Estrella Burgos of the Dominican Republic. Defending champion Denis Istomin and Bosnian Damir Dzumhur will have to play out a final set to decide their first-round tie for the right to play 11-seed Vasek Pospisil, with the score locked at 6-1 6-7(4).

In addition, fifth seed and 2015 Aegon Open runner-up Sam Querrey has an all-American clash with qualifier Ernesto Escobedo first on Court 1, before Cypriot Marcos Baghdatis, who reached the semi-final stage in the East Midlands last year and is seeded ninth this year, will play Evgeny Donskoy of Russia.

British wildcards James Ward, Brydan Klein and Alex Ward all lost in the first round.