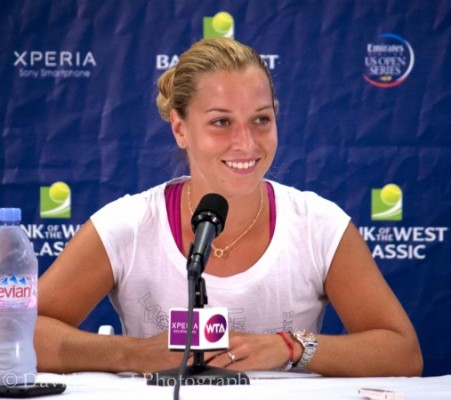 (June 24, 2016) Dominika Cibulkova needed to win twice on Friday to reach the final of the Eastbourne International. The Slovak toppled the No. 1 seed and former champion Agnieszka Radwanska 4-6, 7-6(2), 6-3 in a quarterfinal which was completed over two days due to the weather.
In her semifinal, the former Australian Open finalist dominated qualifier Monica Puig of Puerto Rico 6-2, 6-1.

“It was not easy emotionally because, you know, I was really happy when I beat her on the grass,” Cibulkova said of her win over the top seed. “We played — this was third really, really close match against Radwanska this year and on different surface, first time on grass. For me it was toughest to play her on grass because what I take advantage of her second serve — because she’s playing weak second serve, and I always go for it on the shot, and here on the grass it’s a little bit tougher. It’s really low and you cannot go for it so much.

“But in the rallies I felt really good. I was just — you know, I felt every shot I knew I was going for my forehand, and I was really strong on my backhand.

“And then to come back against a completely different player, against aggressive player, and I knew she doesn’t want to play long rallies with me. She was really going after my serve and everything. So I had to change tactic in my game a little bit.

Well, it’s always a good match, but I don’t think I was playing good enough today,” Radwanska said. “I think she was playing really aggressive, good tennis. I think I step backwards a little bit too much. That wasn’t helping today.”

Radwanska led 6-4, 2-0 before the rains came on Thursday.

Cibulkova will take on Karolina Pliskova for the crown. The Czech bested Britain’s Johanna Konta 6-7(5), 6-3, 6-3 in the semifinals and Elena Vesnina in the quarterfinals 6-1, 6-3.
Pliskova will be attempting to win her second grass court titles in three weeks. She won the Nottingham two weekends ago.

“Definitely I had great results this year on grass except the one in Birmingham, but it was after a tough week in Nottingham,” she said. “But I still was able to win the doubles there. So at least something.

“And so far I’m happy with the tennis the way I’m playing here this week. This was the toughest match this week but happy to be through. Looking forward to the final.”
“She had also some good wins this week, and I think she’s also improving with every match. It’s going to be tough, a little bit different game than today. She’s also playing faster from the baseline but not serving that good.

“Yeah, but for me still the same. I have to keep my game plan to serve well and to play aggressive. There is no other way for me how to play, and especially on grass. Just looking forward to the final.

“We played once few years ago on hard court. She won. Was close match. Happy to play someone who I didn’t play for such a long time.”