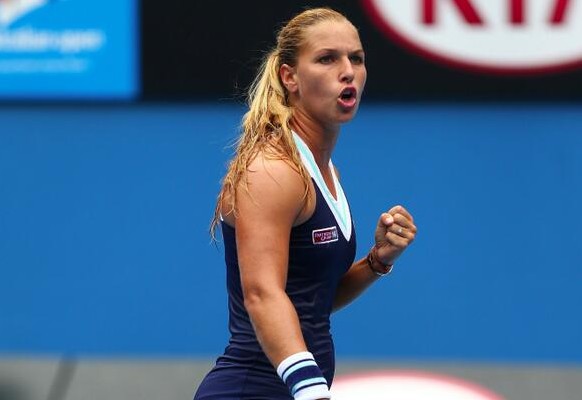 (June 25, 2016) Dominika Cibulkova won her second title of the year and her first career title on grass when she beat Czech Karolina Pliskova 7-5, 6-3 Saturday for the Eastbourne International title.
“It was extremely tough match today,” said the winner. “With the conditions and with the wind it was really, really, really tough to play and focus. That’s why I was really strong about today that I was — in the beginning I was a little bit nervous about the wind, so my serve wasn’t really working really well.

“Then when my coach came, he said, you know, Just focus on your serve. Don’t focus too much on the wind. Do the same things when there is no wind.

“So, yeah, I was in the rallies and I found my rhythm after a while. You know, I was just feeling really good on the court. I knew what I had to do. I was going for my forehands and was really solid on the backhand.

“I was also returning pretty well. So all these things came together, and that’s why I won today.”
“This one is really special one,” the Slovak said about taking home her sixth career tournament trophy. “You know, this is a special title. It’s second title of the year. I was never able to win two titles in one year. We’re in the half of the season and this is my second one. So it feels just great. It’s my first one on the grass.

“This tournament, I would say it’s the toughest one before the Grand Slam, because, you know, everybody want to play on grass and this is a big one. So, you know, the competition here was really strong. I was able to beat the top players on the grass, so it gives me a lot of confidence.”
Pliskova, who was seeking to add a second grass court title in three weeks fell a little short on Saturday.
“She was playing some good tennis,” Pliskova said. “Me, I was playing so-so, sometimes good, sometimes bad. But she didn’t let me to play my game. She was playing aggressive and going to my serves.

“Like I said, she was just a little bit better. I think I had a lot of chances. I didn’t play that bad in those chances what I had some break points.”