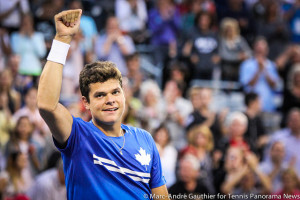 Federer, who seemed to be in control of his service games in the fourth set, making headway into Raonic’s service games, but on the cusp of reaching a tiebreak, blew a 40-0 lead, hit toe double faults in a row, to be broken for the set and the momentum switched to Raonic, who never let it go.

“This one clearly hurts, because I felt I could have had it. So close,” said Federer. “It was really so, so close.”

Federer fell flat on his face, literally and figuratively in the fifth set and Raonic sprinted to a 4-1 lead and never looked back.

“I was able to finish,” Federer said, commenting about the fall. “But I don’t slip a lot. I don’t ever fall down. It was a different fall for me than I’ve ever had.”

He admitted in press that after slipping on the grass that he did not feel the same afterwards.

As for the 25-year-old Raonic, he survives and advances. “I sort of persevered,” he said.  “I was sort of plugging away.”

Two years ago, The Swiss beat the Canadian in the semifinals.

“Two years ago, I bottled up all the difficulties I had on court and never got it out,” Raonic said. “I was quite more vocal and a lot more positive on court.”

“I was struggling through many parts of the match,” he continued. “He gave me a little opening towards the end of the fourth. I made the most of it.”

“You’re playing who Roger is today,” Raonic added, “not who he’s been the past few years.”

Raonic will be joined in the final by 2013 champion and second seed Andy Murray. The Scot reached his third Wimbledon final and third major final of the year easily passing 10th seed Tomas Berdych 6-3, 6-3, 6-3. This will be the 11th major final of Murray’s career.

It will be the first major final where he won’t face either Novak Djokovic or Roger Federer. Murray is 2-8 in major finals.

“Obviously, first time I’ll play a Slam final against someone that isn’t Roger or Novak. So, yeah, that’s different,” Murray said to media. “But you never know how anyone’s going to deal with the pressures of a Slam final. So just have to go out there and concentrate on my side. Do what I can to prepare well for it and see what happens.”