You are here: Home / Contributors / Venus Williams Playing Like The Top Seed She Is At The Bank Of The West Classic 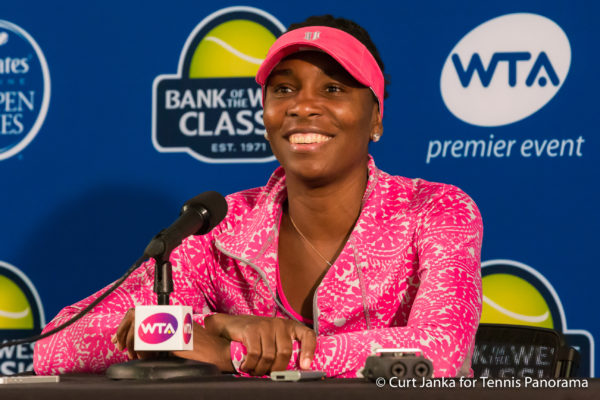 (July 22, 2016) STANFORD, California –  A relaxed Venus Williams played composed tennis as she breezed to a 6-4, 6-1 win over 17-year-old wildcard Catherine Bellis at the Bank of the West Classic on Friday night. While it may have taken three sets for Williams to get by her previous opponent, there was no sign of tension in her play on Friday night. Experience may have been the key against her younger opponent.

When asked why she looked so at ease on the court she said, “I just felt like I had a lot of experience and as a young person she has to go for a lot more than I ever have to go for because I understand the game more. So I felt just comfortable that I could control the match.”

“After Wimbledon I was really pumped,” the 36-year-old Williams said. “I was like, ‘I can’t wait to play.’ That felt good. It felt good to be eager.”

When asked what else she is looking forward to this summer, the two-time Stanford winner replied, “There’s so much to look forward to! The semifinals tomorrow is like my main focus. The Olympics I’ve been waiting for four years. As soon as the last one was over I was ready to go again. It’s getting closer and it feels surreal but when I get there it’s gonna be real. And after that you just turn right back around and play the Open.” 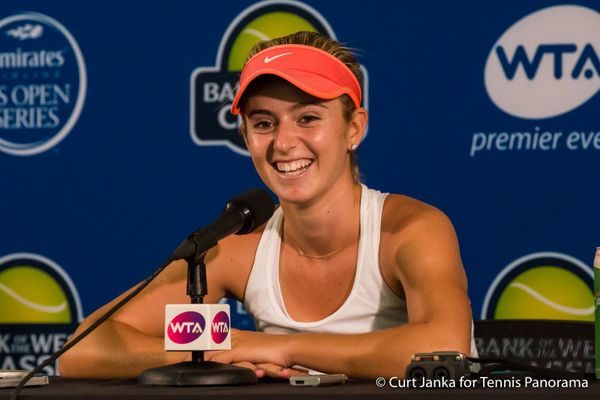 Despite a quick second set, Bellis did make the first set very competitive. “I learned a lot,” she said. “I think mainly I just have to focus on the key points. There are a couple points in the first set that I think if I played a little bit more aggressive I could have won them. But, you know, she’s obviously the number one seed here, so it’s unbelievable to be on the court with someone like her.“

Asked about her short-term goals, Bellis smiled and said, “Yesterday, actually, I committed to Stanford. I’m just going to see how the next year goes in my pro career.” She explained that after another year on tour, she would start her college career at Stanford.

Top seed Williams will face Alison Riske in the semifinals on Saturday. Riske advanced when her quarterfinal opponent fourth seed Coco Vandeweghe suffered an ankle injury and had to retire.

In the bottom half of the draw, second seed Dominika Cibulkova came back from two early breaks to win 7-5, 6-0 over Misaki Doi. Cibulkova will next face third seed Johanna Konta, who beat her quarterfinal opponent, Zheng Saiai 6-2, 4-6, 6-3.